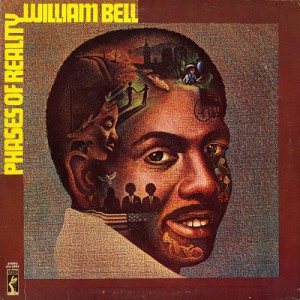 Rip and research by Mr.Moo

Today, if most people recognize the name William Bell, its probably for his work as a writer (‘Born Under a Bad Sign’, ‘You Don’t Miss Your Water’, etc.), rather than as a singer.  That’s unfortunate since Bell’s solo catalog is surprisingly strong.

1972’s self-produced “Phases of Reality” is a perfect showcase for Bell’s talents.  Propelled by Bell’s likeable voice and  the cream of Muscle Shoals sessions talent, unlike many Stax LPs, this one’s quite diverse.  Exemplified by the title track, ‘Man In the Street‘ and several other songs, lyrically the album was certainly more activist than his earlier work. Normally that might boit be a good thing, but in this case most of the eight Bell-penned tracks featured something worth hearing – a neat melody, an interesting lyric, the title track stands as one of the earliest uses of a drum machine that we’ve heard.  Highlights include the percussive opener ‘Save Me‘, ‘Fifty Dollar Habit‘ (sporting a surprisingly blatant anti-drug lyric) and the reggae flavored ‘Lonely for Your Love‘.  Elsewhere Stax tapped ‘Save Us’ b/w ‘If You Really Love Him‘ (Stax catalog STA-0128) as a single.

One of my favorite Bell releases … 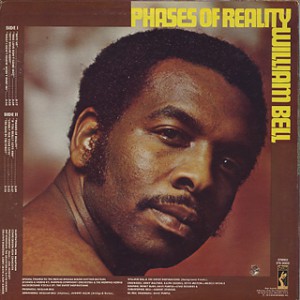 Soul singer William Bell, one of the earliest hitmakers for the legendary Stax label (“You Don’t Miss Your Water“, 1962), was a great writer as well as a performer, although his own recordings seem to get lost in the shuffle many a times.

The man who (co-)wrote wrote peerless classics such as “Born Under a Bad Sign” and a slew of songs for aces as Otis Redding and Carla Thomas, released high quality albums under his own name as well.

This particular one is my favorite: the cover is sheer brilliance, another fantastic artsy collage of early ’70s (social) despair craftily painted in the sweet face of Bell himself.

Bell never was an avid ‘protest singer’, but on this album he got seriously righteous. Aside three gorgeous country-soul styled ballads and the reggae-esque “Lonely for Your Love“, the other half of the record features some very intense funk based political songs.

“Save Us“, written by Bell as far back as 1962 during the Cuban Missile Crisis, is a blasting piece of fiery funk, complete with congas and wah wah guitars, sporting an infectious yet almost desperate plea for reflection.

“Fifty Dollar Habit” is a eerie tale of drug addiction, set to a loping groove that features the clever use of the sitar. Truly one of Bell’s most captivating compositions.

“Phases of Reality“, the title-track, sounds unnervingly similar to Sly Stone’s drughazed slurring on “Family Affair”. This is no pun, though: the gloomy, almost sarcastic groove fits Bell’s deliberately ‘apathic-sounding’ vocal here to a T. Crucial stuff, this one.

Finally, the LP closes with the straight up, soulful lament “The Man In the Street“. A great funky tune dealing with that part of the population that always gets hit the hardest: the common man and woman.

Another overlooked gem in the Stax catalog… Essential.