Excellent and rare bluesy soul LP from Tina Britt, produced by Juggy Murray. For a soul singer with two Top 40 R&B hits, very little is known about Tina Britt. Very little. This is her debut 1969 LP on Minit which is her only complete solo output. Tina Britt was famous for recording tracks by other great writers and musicians including ‘God Bless The Child’ (by Billie Holliday), ‘Jonny I Love You’ (by Booker T), ‘My Lovers Prayer’ (by Otis Redding) and ‘Sookie Sookie (by Steve Cropper and Don Covay).

This is a wonderful find and I let Trakbuv to review the album in his unique delightful way.

This is a @320 vinyl rip of the original Minit LP including covers. 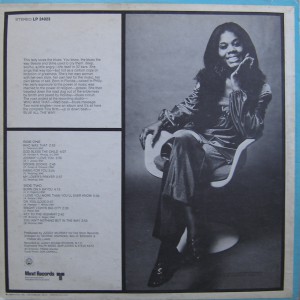 ” Well, Nikos tentatively asked me to review what he may have suspected to be out of my comfort zone. He was right – the prospect of a bluesy singer I’d never heard of covering other people’s toons failed to dampen my appetite.  But, hey, never say never – and I needed the exercise, not to mention a threadbare pocket lining that needed resuscitating.  Rubbing down the usual suspects didn’t turn up many leads as to the dame’s whereabouts.  Seemed like I was going to have to fly this one with no parachute…or wings.  Did manage to track down that the lady had operated under an alias, being born originally Tina Brittingham back in ‘38.  False names always give me the jitters, but things started cooking when I got drift that she had a couple of Top 40 R&B hits, with her biggest hit, ‘The Real Thing’, reaching the dizzy heights of #20.  This broad sure had some pedigree, that’s for sure.  Seemed she’d had several rotating plastic discs issued, and this is where I managed to pick up her scent.  I followed her from Eastern Records, Veep, and eventually to Minit Records – this wasn’t gonna be cheap on Nikos’ expenses kitty.  Finally, I managed to find her hideway – a jook joint on the corner of 33 and a third, caught helplessly between the grooves of ‘Blues All The Way’.  Released in 1969 on Minit, and produced by her ever faithful side-kick and muscle, Henry ‘Juggy’ Murray.  Knew him from his stretch at Sue records – smooth operator I recall.  Anyways, I take a corner seat at the back of the gig, and fire up a smoke.

Lady T enters stage in a slinky number and is immediately greeted with a steel guitar and a whoop of applause.  She gets straight down dirty with some solid rhythm and blues in ‘Who was that’ and its ‘who’s shoes are under my bed’ pointed accusation.  I immediately push my hat out my face and lean forward – this mama is the real deal.  The sweet laidback sassiness of Billie coupled with the commanding spunkiness of Aretha or Carla, this girl ripped the beer-stained carpet from under me.  Unbelievable – rivet, rivet, rivet.  Then the lights turn low, and the spotlight reveals Tina now propping up a white piano.  My face turns white too, my stomach curls into a small ball, and; Oh Lord, I can’t breath or blink !  ‘Thems that got shall get, them that’s not shall lose’ reaches into my rib cage and has my heartbeat in its hands.  Damn me to hell, but I think this version of ‘God bless the child’ outdoes Billie !  I’m a lovesick fool for you, Lady T, and the night’s hardly begun.  She takes a sip from a tall glass, which then accompanies her to the mic upright.  ‘Johnny I love you’ plays like a doped up Esther Phillips – this girl is positively horizontal on this enticing, cool cucumber.  Then we break out with ‘Sookie Sookie’ and tables are immediately cleared to give the audience some room to move.  I’m the only one sat at this point as she infuses a coquette razzle into the midnight air.   Then it’s bluesville complete with horn section taking ‘Hawg for you’ all the way home.  A choir then introduces ‘My lover’s prayer’, with Ms Britt cooing in a mock weaping wail.  The lights suddenly turn out – silence – is the set over ?

The lights come straight back up, brighter than before with Tina somehow wearing a totally different outfit.  ‘Born on a Bayou’ oozes class, Tina totally faultless as ever and utterly gorgeous horns piping the cream on a luxuriant cake.  Outstanding.  The perennial favourite ‘I love you more’ blends fatefully with the smoke-riddled air, conveying the despair on its choking fumes.  Another standard gets the Tina treatment, ‘Dr Feelgood’ booming those familiar accolades from the stage and clear across town, before cranking it up a touch for ‘Bright lights, big city’.  She now enters a gentle swagger to accompany the chugging ‘Key to the highway’ with an effortlessly mesmeric performance. The acidic ‘You ain’t nothing but in the way’ burns from a glistening wound as she tears the lyric sheet to threads. I have no connection with space or time.  I live only for her next phrase.  The lights suddenly turn off and on again, but Ms Britt is nowhere to be found.  I check backstage for the dressing room, but find only a yard full of overturned empty barrels.  I re-enter the building and I’m greeted with an empty abandoned saloon.  Was it all some crazy dream – I’ll leave you to be the judge. ”
———————————–

In 2006 the album was released for the first time on cd including bonus tracks from her early work which was influenced by Berry Gordy’s music machine. The songs are great slices of uptempo soul and included her biggest hit, The Real Thing, which climbed sure-footedly to #20 on Billboard’s R&B chart.

Now listen “Who Was That” and enjoy the rest of the album.

Conversation for album: Tina Britt – 1969 – Blue All The Way