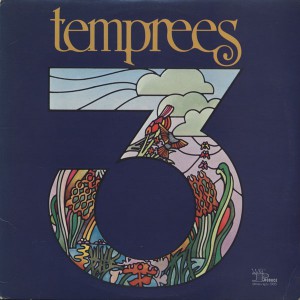 Rip and research  by Mr.Moo

Brilliant work by one of the greatest harmony groups of the south – the mighty mighty Temprees, standing proud on this, their 3rd LP! The album’s a bit less raw than some of the group’s otheralbums, and some of the tracks were recorded in Philly, and have a bit of a warm 70s Philly soul finish – a great approach that takes the group even farther than you might have thought from their first two albums! 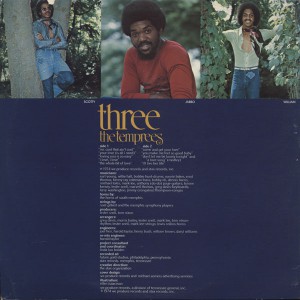 I’ve said it in my earlier review, but The Temprees remain one of those consistently overlooked mid-1970s soul vocal groups which is a monumental shame given their talent.  It would be hard, but ifI had to pick one, 1974’s “Three” would probably the nod as my favorite of the three Tempress studio sets.  Co-produced by Tom Nixon and Lester Snell, musically it wasn’t much different from theearlier sets, offering up a mixture of the group’s patented ballads and isolated up-tempo numbers.  That said, this time out William Johnson, Jasper Phillips, and Harold ‘Scott seemed effortlesslycomfortable in the studio, willing to take occasional risks with the material, including a couple of stabs at more dance oriented numbers (”I Love, I Love‘).  Maybe I’ve just been listening to too much Al Green, but on a couple of tracks Phillips sure seemed to be trying to channel Green – check out his performance on ”Loving You Is So Easy‘.  It wasn’t the perfect Temprees album, the’Don’t Let Me Be Lonely Tonight‘ and ‘A Love Song‘ medley was simply dull (and way too long), but song for song this one was pretty impressive.

– For a group best known for their slow-grind ballads, personally I’ve always been partial to their upbeat numbers. and Mr. Cool That Ain’t Cool” was one of their best performances.  About as closeto a funk workout as these guys ever got, the chorus was just to-die-for.  Easy to see why it got tapped as the lead-off single.

– A far more typical performance, ‘Your Love (Is All I Need)‘ was a breezy and easy going ballad that had plenty of commercial potential.  Once again Johnson and Scott provided some simply impeccable backing vocals.

– Another wonderful ballad, ‘Loving You Is So Easy’ found lead singer Jasper Phillips adding a touch of Al Green sexiness to the mix.  One of my favorite performances.  Great drums on this one.

– The second single off the album, ‘I Love, I Love‘ had an even stronger Al Green feel to it, though the effect was somewhat diluted by the mundane disco-flavored backing.

– Another up-tempo effort, ‘The Whole Bit of Love‘ was also side one’s biggest disappointment.  The song itself wasn’t particularly impressive, sounding like it had been thrown together in aninstant with one of those boilerplate mid-1970s arrangements.  Add to that a lackluster performance and you had something completely forgettable.

– Opening up side two, their cover of Redbone’s ‘Come and Get Your Love‘ was fun.  Musically, other than adding some of their patented harmonies,  it didn’t stray too far from the original arrangement.  Still, it was doubtful you’d forget the original version of the song.

– At least to my ears ‘You Make Me Feel So Good Baby‘ has always reminded me of something out of the Philadelphia International camp.  It was certainly a nice enough ballad, but the arrangement andoverall feel was different from their standard performance.   Like it a lot …

– Their heavily orchestrated medley of  ‘Don’t Let Me Be Lonely Tonight‘ and  ‘A Love Song’ saw the trio veering into supper club soul territory.  Very Barry White MOR-ish and forgettable.

– Underscoring some of my earlier comments, the rapid fire ‘I’ll Live Her Life‘ was another standout performance.  Fantastic melody and the up tempo arrangement seemed to inspire Phillips and company.

Conversation for album: The Temprees – 1974 – Three