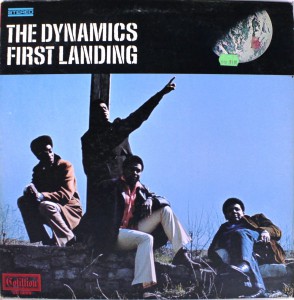 Hailing from the Motor City, The Dynamics have mixed their soulful sound with some southern flavor and created First Landing. Backed by some incredible grooves, this is a rare treasure whose luster will bewitch fans of soul music.

Managed by Aretha Franklin’s husband, the Detroit band the Dynamics featured four singers, each able to take the lead with a different vocal style. Following in Franklin’s footsteps, the band headed to Memphis to mix their sound with Stax-flavored soul. Produced by Tommy Cogbill and Chips Moman, responsible for hits like Elvis’ “Suspicious Minds” and the Box Tops’ “Cry Like A Baby,” 1969’s First Landing never fully caught on with R&B fans, with only a minor hit in “Ice Cream Song.” 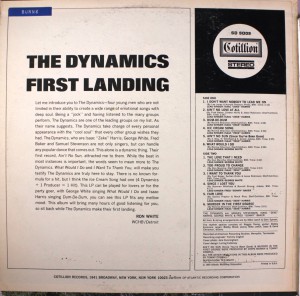 An overlooked treasure from the Atlantic vaults — the first album by The Dynamics, and arguably a much greater record than the group’s better-known set from the 70s! The Dynamics were a Detroit group from the late 60s, with that heavy harmony sound that was becoming a standard for the city’s soul scene — and they were managed by Aretha Franklin’s husband Ted White, who was probably responsible for getting them to record at Atlantic. Oddly, this session was recorded in Memphis, not Detroit – with production by Tommy Cogbill and Chips Moman – who give the group a deep soul bottom that adds a lot to their still-rough vocal style. There’s a great mix of deep and smooth going on here – a style that reminds us a bit of the few great Memphis vocal groups of the period, but which also has a Detroit tightness at times too. The tracks are a great mix of originals by Don Mancha, Fred Baker, Ronnie Shannon, and others – and titles include “Ain’t No Love At All”, “I Don’t Want Nobody To Lead Me On”, “What Would I Do”, “Fair Love”, and “Murder In the First Degree”.

A killer, and the kind of record you started collecting soul for!

The Dynamics’ 1969 release “First Landing” is great, but an interesting reminder that the R&B music from 1945 to the synthetic “dark ages of Black music” from 1983 to very recent times was so great, that countless wonderful albums like this were considered mediocre at the time, but brilliant today! Muscially, these guys are first cousins to the (also underrated) Mad Lads. This combines Northern streetcorner doo-wop with gritty-but-pretty Southern Soul (like the Mad Lads, this was also recorded in Memphis). Their signature tune “Ice Cream Song” is a revelation of all that works well in a Soul record-Wonderful harmony, catchy hooks, rotating leads, superb musicianship, clever lyrics and heartfelt singing. “Since I Lost You” is another standout here. Here, our man gets into a preaching mode midway though to the end of the tune that almost puts James Brown to shame! Other fine sings are “Dum de Dum” (not as bad as the title would imply), “What Would I Do” (which is simply beautiful), and “I want to Thank You.”