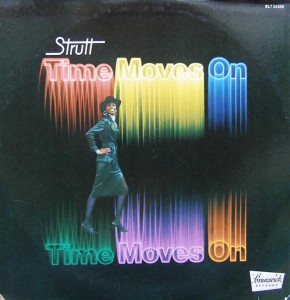 Strutt is a group of musicians all hailing from New Jersey. It numbers eight elements (six musicians and two vocalists) and was formed in 1973 by Carmen Cosentino who plays the guitar. As the note on the cover says: “Strutt was organized to present to the world a new creative individual sound – The New Jersey Sound”

This is a tight, competent set of funk from Strutt, the band seemed to vanish without a blip after this album’s title track, “Time Moves On“, went all the way to number one on the disco chart in 1976. Also includes “Said you didn’t love him” a wicked 70’s crossover monster with killer bridge in the middle, “Funky baby feet” and instrumentals full of organ swipes and horn blasts.

This band was not the same as every other band out during this time period…it was better. But it was another of those bands that didn’t get the recognition it deserved.
It is getting a lot of play overseas now, because it is worth listening to.
Even if you don’t enjoy every song, I promise you will find at least one that you will continue to play over and over and over again.
When disco was booming in the mid 70s there was a transition between european disco and funky soul. This is undisputibly the latter category. If you like B. T. Express, Ohio Players, Cold Blood, Tower Of Power, and the like, you will probably like this group for what it is.
“Time Moves On” I heard in Los Angeles during the time, and it was a hit.
Extremely brass and funky, with versatile break.

Formed in New Jersey, Strutt was a disco-funk band signed briefly to the Brunswick label. Their lineup included guitarist Carmen Cosentino, keyboardist Frank Portolano, woodwind player Jim Mecke, trombonist Joe Escobar, bassist Edward Walker, and drummer Roger Zumbo. With pianist/producer Benny Clark at the helm, Strutt recorded a full-length LP, Time Moves On, in 1975. “Funky Sign” garnered some airplay in dance clubs, as did the title track and its B-side “Front Row Romeo“. However, nothing further was heard from the group.

This album is one of these little masterpieces out on the fabulous Brunswick Record label.