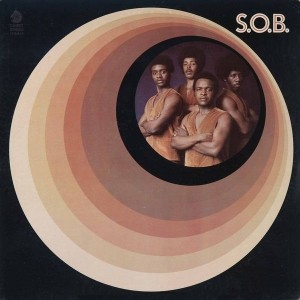 A lost nugget from the Chicago soul scene, and one of the rarest 70s albums on Chess! The album’s filled with great tracks in a range of soul styles,  sweet, funky, and Northern Soul,  all wrapped together with a tightness that rivals The Dells or Temptations at their best, and topped with harmony vocals that are simply mindblowing. Producer Bobby Miller really helps the group find their groove and arrangements by Richard Evans and Charles Stepney tie the whole thing together beautifully. All tracks are originals, and completely fresh, the kind of lost soul tunes you’d normally find only by digging through a pile of rare 45s. Sampled famously by Tribe Called Quest and many others.

A stirring slice of early `70s Chicago sweet soul that harks even further back to the Impressions and the Dells, Shades Of Brown has long been a favorite of soul fanatics.

The lead single, “The Soil I Tilled For You“, features a booming breakbeat that has been sampled repeatedly over the years, but this album, which features arrangements by Richard Evans and the legendary Charles Stepney, is remarkably consistent as a whole, and is indeed one of the finest psychedelic soul LPs of the early `70s. 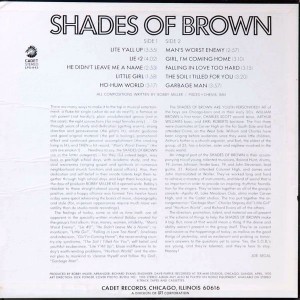 Chicago’s Cadet Records was going great guns in 1970. Groups like the Dells, Rotary Connection, and the Ramsey Lewis Trio were all hitting the regional and national charts. Into this hotbed of talent entered a new group made up of early twenty-something males from the Altgeld Gardens projects (the same locale that had given birth to numerous Chicago soul acts such as the Norfleet Brothers, Patti & the Lovelites, and The Debonaires to name just three).

Billy Davis, A&R man from Cadet’s parent company Chess, signed the Shades of Brown after their initial deal with ABC fell through. Producer Bobby Miller, who’d been working with the label’s premier vocal group the Dells, was brought in and he brought his house arrangers Charles Stepney, and Richard Evans, and numerous instrumentalists (including Phil Upchurch, Gene Barge, and Morris Jennings) to help fill out the group’s sound — the four vocalists were backed by a smoking instrumental trio on guitar, bass, and drums. The end result is S.O.B., one of the great forgotten slabs in Cadet’s history.

These ten cuts are drenched in the trademark sound of crooning, harmony vocal Chicago soul just as it met the harder driving psychedelic rave-up soul and funk that Motown was beginning to engage with the Temptations and the Four Tops and the highly conceptual vocal group sound of Philly soul. An example of the former is in the glorious “Little Girl“, where the elegant vocal harmonies are drenched in strings and dramatic tom-toms. Check the furious tempo on “He Didn’t Leave Me a Name“, with its socially conscious lyrics.

The big end horn section on “Man’s Worst Enemy“, countered with a huge, clear rolling bassline, is high-class uptown soul at its best. The swirling B-3 and low-end strings on “Girl I’m Coming Home” get close to the Dellsand Temptations in terms of tightly arranged emotion and sung harmonies.

“Falling in Love Too Hard” has one of the most ingenious uses of conga drums ever employed on a soul record west of Harlem. That said, any group tracks on this set could be interchanged with them — meaning, of course, that this is a stone classic.