Satisfaction Unlimited – 1972 – Think Of The Children

This is one of the rarer releases on the Hot Wax label helmed by Brian and Eddie Holland and Lamont Dozier. Satisfaction Unlimited‘s solitary album is yet another signature in the book of lost opportunities. But if I could only be remembered for one LP, I would definitely hope it was something nearly this good. Still with the one foot in the golden era of Motown, this has its good foot firmly planted in the 70s with a treasure trove of tuneful delights. Bypass at your peril, me hearties !!

This is a @320 vinyl rip of the original Hot Wax LP. A low quality rip was send a few months ago by a follower of the blog. But i never lost faith I could find a better one. So here it is. 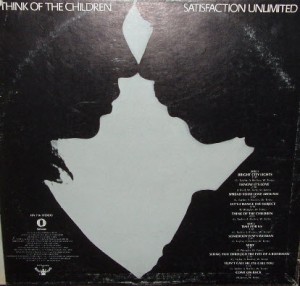 This release by the obscure combo, Satisfaction Unlimited, has the unfortunate accolade of being the final long player release on the Hot Wax Records imprint. Formed originally by the legendary Holland-Dozier-Holland team in 1969, Hot Wax ran into financial difficulties in 1973 whereupon they concentrated their efforts on the Invictus outlet. However, the roots of the band actually pre-date the H-D-H collaboration (H-D-H’s first Motown release being ‘Dearest one’ in 1962). As The Marvels, they originated in the backstreets of Washington DC, comprising of Sam Gilbert (lead), James “Junior” Isom (second tenor), Ronald Boyd (baritone), and James Mitchell (bass). In 1958, they ventured to New York to record the skip-a-long pleaser, ‘I Shed So Many Tears’ with James Isom on lead. The ensuing rush of tumbleweed meant the band didn’t venture back to the studio for another 3 years, with the tuneful doo-wop ballad, ‘For Sentimental Reasons’, and the similarly slanted ‘Wedding Bells’ a year later, this time under the name of The Senators (just check out that crazy lazy piano playing!).

Several personnel changes later, they returned as The Satisfactions around ‘66 with a string of 45s on the Smash and Lionel labels. Some mighty fine and feisty tracks were included among these sides, including the urgent ‘Use me’ (love this!) and ‘Take it or leave it’. They finally hit paydirt with ‘This Bitter Earth’ in 1970, reaching #36 on the R&B Charts. This was consolidated by the radiant, midtempo ‘One light, two lights’, peaking at #21 a few months later. A gorgeous track, by the way. They changed their name to Satisfaction Unlimited a year later, the personnel now standing at Lorenzo Hines (lead tenor), James Isom (second tenor), Earl Jones (baritone), and Fletcher Lee (bass), linking up with Hot Wax in ‘72.

The years spent fortifying their sound certainly paid dividends. Just give the opening track and lead single release, “Bright City Lights”, a listen. A gentle, summery track that reminds me a little of The Rascals ‘Groovin”, it’s the effortless confidence that is so remarkable with a sound more reminiscent of a band with a score of hit singles behind them. You know you’re in for a treat y’all !! “I Know It’s Love” keeps up the calibre, with the same fabulous lead (Lorenzo Hines ably assisted by James Isom) giving David Ruffin & The Temptations a run for their money. Then it’s one the highlights for me, the thunderously mature “Spread Your Love Around” – surely the perfect 45. With some glorious piano-tinselled highlights, the ballad with an insistent beat “Let’s Change The Subject” has a mesmerising message – absolutely top drawer, and probably my favourite track. The title track and its organ-ground melody is a definite wink at their doo-wop roots, and again it’s the natural feel of the lead vocal and harmonies that carry its success so effortlessly.

Side B leads with another big highlight, the ultra-smooth “Time For Us”, with exceptional use of blubby horns, I’m cast adrift on a boat just big enough for me, the one I love and a picnic for two, with a dangling bottle of wine being cooled by the still, sun-sprinkled water. We’re back on tried and tested H-D-H territory with the bold and striking “Somebody’s Else’s Woman” conveying its lyrics with the snarl of a banshee. The more pop-flavoured “Why“ is actually a really nice change of pace (reminds me a little of Lamont Dozier’s own ‘Why’ from ‘Working On You’), with a terrific crescendo on the outro and a track that grows and grows. Then it’s another track that gets way way under my skin, the awkwardly hypnotic “Seeing You Through The Eyes Of A Blind Man” – nothing ordinary about this gem ! “Don’t Call Me” is a thoroughly intriguing inclusion with a fresh lead and rock slant, it definitely defies all that has come before – and I love it.

The exceptional quality of the tracks appears to be largely indebted to the incredible writing skills of Mr A. Rackey, Mr G. Taylor and Mr W. Terry. I have no idea who produced this album, but the calibre and musicianship is outta sight. I would go so far as to say that this is possibly the most satisfying of the LPs that I am familiar with on the Hot Wax label, which includes such luminaries as 100 Proof, Honey Cone, Flaming Ember, The Politicians and Laura Lee. Wow, some amazing LPs right there !! Perhaps as the final LP of the label, it demonstrated (together with The Politicians LP) that the Motown legacy had finally morphed into the more sophisticated sound that was the early 70s. Whatever, this really is another essential addition to your admirable, growing soul collection.

Check out here for more info on The Marvels.

I would like once again to thank Trakbuv for his incredible contribution to FMS. He’s been involved in difficult tasks and managed to do it great. Bless you brother!

Buy the AlbumSatisfaction Unlimited – 1972 – Think Of The Children

Conversation for album: Satisfaction Unlimited – 1972 – Think Of The Children