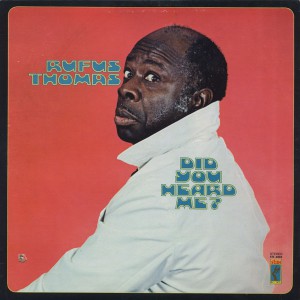 One of the best funky LPs by Rufus Thomas – recorded in the early 70s with backing by The Movement and The Bar Kays, and with a good raw Stax sound on most cuts! Rufus is certainly in the “funky ” mode here – doing a formulaic approach to funk that has him taking a theme for a song, and pushing it to the max by shouting and grooving it over and over again. Fortunately, the style still works well here – without the cliches of later albums, probably thanks in part to the album’s tight funky backgrounds. The record features three tasty two-part single tracks – “The Breakdown (parts 1 & 2)”, “Do The Push & Pull (parts 1 & 2)”, and “Do The Funky Penguin (parts 1 & 2)” – all of which stand as some of Rufus‘ most-collected funky singles. 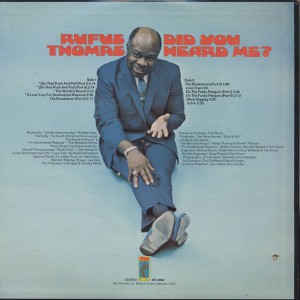 It wasn’t billed as such, but 1972’s “Did You Heard Me?” was essentially an eight track compilation pulling together a series of three recently released Stax singles, along with a new 45 (‘6-3-8’) and one miscellaneous offering (‘Ditch Diggin’).  Speculation on my part, but perhaps the album was released to capitalize on Thomas performances on the Wattstax album and film.   Regardless it was kind of an odd marketing move given Thomas had never been a big album seller (up to that point he’d released almost two dozen singles, but only two albums).  Add to that, there was plenty of Stax material to pick from, which made you wonder why these particularly tracks – No ‘Funky Way’ ?  No ‘Sixty Minute Man’ ?  Not that there was anything wrong with these selections.  Anyhow, here’s what the package pulled together:

And you didn’t think anyone was doing “dance” tunes into the ’70s … ‘(Do the) Push and Pull)‘. Well Rufus Thomas was still tapping into this musical genre and while it may not have been the most original concept, the result was a simply killer tune.  James Brown (who was name checked on the tune) had absolutely nothing on Thomas.   Kicked along by Thomas’ amazing voice (the opening screech was …  well fantastic) and support from The Bar-Kays (the give and take horns were simply glorious)  this was one of those tune where you simply couldn’t help but get up and move.

‘The World Is Round‘ was originally released as a 1965 single.  Musically it was a hardcore soul number that saw Thomas daring to take on some of the keystones in the black social structure.   Good tune to admire what a great voice Thomas had and kudos to Michael Toles wonderful guitar (Thomas name checks him). 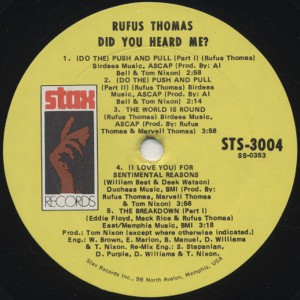 (I Love You) For Sentimental Reasons, Sure, a large part of it was Thomas’ own fault (check out the stupid album title), but the general perception of the man was that he was kind of Stax’s clown prince; more at home with goofy, novelty material than playing it straight.   Anyone who subscribed to that view might want to check out this old-school ballad.  yes, the song was a sappy ballad, but judging by this performance, Thomas was the complete package with a voice that would have given Eddie Floyd, Wilson Picket, Percy Sledge, or scores of other competitors a run for their artistic money.

The Breakdown (Part 1), OMG – it doesn’t get funkier than this !!!   All hyperbole aside, this is perhaps the best single he ever released.  How a 54 year old man could pull this one off is a complete mystery to me.  By the way, anyone who thought Thomas was just a studio entity needs to check out this 1972 live clip from the famous Wattstax concert.  I’m not sure how many folks would have dared wear the pink hot pants, let alone the white go-go boots,  Wardrobe selections aside, even James Brown would have been hard pressed to keep up with this rousing performance. Part two found Thomas slowing the tune down and upping the funk quotient with The Bar Kays chirping along in the background.   Sweet bass line from James Alexander (?).

Love Trap , Kicked along by Harvey Henderson’s sax, ‘Love Trap’ was one of those fantastic soul-meets-R&B tunes that Thomas seemed to effortlessly toss off.  Another wonderful example of just how good Thoams’ voice was; this was one of the album’s hidden gems. Do the Funky Penguin (Part 1& 2),
Okay, it falls short in the originality sweepstakes, but since ‘Do the Funky Chicken’ scored so well, why not go back to the creative well.  Same funky structure and almost as good as the earlier tune which is probably why Stax tapped it as a single.  Ditch Digging , Another “dance” tune, though this one served as an example of diminishing returns …   Nice, but didn;t measure up to the others. Kicked along by Alexander’s fantastic bass and some punchy horns, ‘6-3-8‘ has been described as Thomas’ ode to illicit gambling.  It’s a fitting tribute to the habit.

Classic Stax album that every self-respecting soul collector should own.