A landmark first album from drummer Norman Connors – a spiritual jazz masterpiece that builds wonderfully on the post-Coltrane tradition! Norman is years away from his smoother soul recordings at this point, and coming out of a righteous jazz background that included work with Marion Brown and Archie Shepp. For this initial set, Norman’s in incredible company – working with players that include Herbie Hancock on both electric and acoustic keys, plus Eddie Henderson on trumpet, Gary Bartz and Carlos Garnett on saxes, Stanley Clarke on bass, and Billy Hart and Airto on percussion – plus a chorus of vocalists on the album’s mighty title cut! 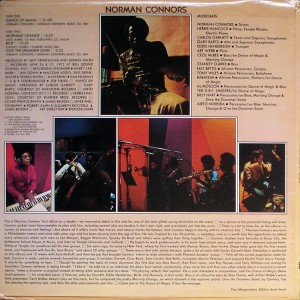 Oh my god, oh my god!!! This album is totally incredible. I could leave this review at that, but that might be a bit lazy. In short though, there’s not many albums that have impressed on a first listen as much as this one has.

The title track, which takes up all of side one, is an incredible accelerator of a tune. This tune is like a totally magical pagan festival, full of euphoria, percussion, chanting, and just the most exhilarating music you could ask for, all packed into 21 minutes. Imagine a spiritual dance/festival, but condensed and pumped the hell full of steroids and energy, it’s so intense it should come with a warning. Side two is no less invigorating, but slightly more westernised than the title track. There’s a kind of spy film feel to the first two tracks, but with all the best elements of spacey, free, psychedelic and afrocentric all lumped into the equation. This album could almost be accused of being a little over the top, but thankfully it stays just on the right side of the ‘too much’ boundry.

Norman Connors, considering he was such a young guy at the time, has managed to pull together some of the best of the ’70s jazz world, for example, Herbie Hancock, Eddie Henderson, Cecil McBee, Stanley Clarke, Gary Bartz, Art Webb, Carlos Garnett, Alphonse Mouzon, etc. I suppose if you chuck that lot into a studio you’re bound to get something incredible come out of it.

This album literally shakes you by the scruff of the neck for 40 minutes, and then just tosses you aside when it’s done. There are not many albums out there that are as much of an exhilarating ride as this one.