A much more upbeat record from Simone than we’re used to, although a more upbeat Nina Simone is still a fairly calm, reserved figure.

Some of the jumped-up moments are pretty excellent -the Ray Charles-esque “I’m Gonna Leave You“, the cover of “Brown Eyed Handsome Man” – but the record peaks on its two most spectral moments, the spritiual and minimal “Come Ye” and the portentous and insidious “Keeper of the Flame”.  The latter of those two must be considered a career highlight for her, it’s incredible.

You’d probably struggle to pain this as an essential part of Simone’s story when it competes with records like Wild is the Wind, Pastel Blues, and Jazz as Played in an Exclusive Side Street Club , but if you ever find yourself as completely ensnared by her music as I have recently, this is a pretty good stop-off. 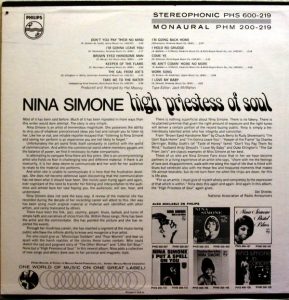 Taking its title from the moniker bestowed upon the artist by her fans, High Priestess of Soul is Nina Simone’s final album for Philips, recorded in New York City during August 1966. It is one of the lighter Philips-era albums, with an accessible and quite commercial band sound featuring orchestral arrangements by Hal Mooney, but the album is not only devoted to “soul” material.

The sweet “Don’t You Pay Them No Mind” is one of the album’s highlights, an inspiring and optimistic ode to a lover, while the up-tempo “I’m Gonna Leave You” is a successful number penned by Simone’s guitarist Rudy Stevenson. She also tackles lighter material, such as Chuck Berry’s R&B hit “Brown-Eyed Handsome Man” and another fast-tempo Stevenson number, “I’m Going Back Home“. Simone is also equally adept at swinging jazz numbers, such as “The Gal from Joe’s“, originally recorded for Simone’s 1962 Colpix album Nina Simone Sings Ellington, and “Work Song“, which first appeared on 1961’s Forbidden Fruit.

But the real heart of the record features some intimate, sophisticated songs: the extraordinarily sensual “Keeper of the Flame“, with an exotic woodwind hook, is serene and sultry with an excellent vocal performance from Simone, while the gospel-influenced “Take Me to the Water“, featuring a backing choir, is simple, pared-down, and Godly.

Another highlight is the minimalist African-accented “Come Ye” where Simone’s deep, brooding vocals are at their sexiest. The album is also home to the regular quota of smoky ballads, with the emotive “I Hold No Grudge” particularly successful.

At 33 and with a ten-year career behind her, High Priestess of Soul finds Nina Simone comfortable in a range of styles, from pop to R&B and soul to blues to gospel. As ever, as an album it is not especially consistent but the diversity and high-quality performances and arrangements make up for some of the unevenness. It is a fitting end to a seven-album run for the Philips label in which Simone recorded a number of her most iconic songs and highlighted how adept she was at performing in a range of styles and settings.