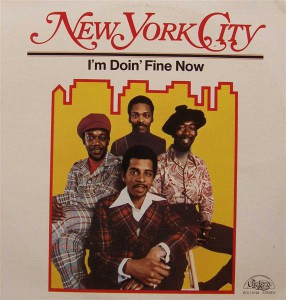 The title cut, “I’m Doin’ Fine Now” is the one that many of us know New York City by. An oldie from 1973, but still a great oldie. New York City was produced by Thom Bell, Wes Farrell and John Bahler.

-New York City! The name of this tight, professional quartet implies diversity, drive and the spirit of a great metropolis. it’s all here for the listening-including the smash hit “I’m Doin’ Fine Now”. Their first album titled after the single, in which they apply their compellingly original stamp to such classics as “By The Time I Get To Phoenix” and “Hang On Sloopy”. The album also unveils the composing gift of their chief writer Tim McQueen. In addition to McQueen, New York City is John Brown, Edward Schell and Claude Johnson]]. All four men have been singing for partically their whole lives, first in the church, then in high school and professional groups. John Brown, was first tenor for the Five Satins (In The Still Of The Night, To The Aisle) and also sang backup with the Cadillacs on all their hits. His sister Estelle is a member of Sweet Inspirations. Actually, the flash and the fire that is New York city is no flash-in-the-pan, but rather the result of four years of intensive group exploration, singing, writing and performing together under different names in order to achieve their ultimate New York City indentity (from the back cover).

This is a @320 vinyl rip of the original Chelsea Record including covers.

New York City scored the first time out with “I’m Doing Fine Now,” so on the surface the group may have seemed like just a bunch of guys who got together, had a hit, and disbanded. Members John Brown and Claude Johnson had illustrious histories in music. Brown sang with the Five Satins, the Cadillacs, and filled in with the Moonglows when founder and member Harvey Fuqua called. Johnson sang with the Genies and was Don of Don & Juan. Tim McQueen (lead singer) and Eddie Schell, like Brown and Johnson, had sung in countless groups around New York City.
Before New York City, the four had recorded and gigged under the name Tri-Boro Exchange — a city bridge that links three boroughs (it was suggested by producer Wes Farrell). One single was released on Buddah Records. Farrell convinced Philly legend Thom Bell to produce some tracks for the group, including “I’m Doing Fine Now”, written by Sherman Marshall and Bell — it went to number 17 pop in 1973. On the strength of the hit they started making personal appearances. Backing them on the road was the Big Apple Band, whose members included the late Bernard Edwards and Nile Rodgers, who later formed Chic. None of the follow-ups came close to repeating their initial success. “Make Me Twice the Man,” written by McQueen, stalled at number 93, while “Quick, Fast, in a Hurry” peaked at number 79. Chicago’s Notations remade the McQueen song, a ballad that suggested their deep doo wop roots. The Chelsea label released two albums and a handful of singles, and then it was all over for New York City.