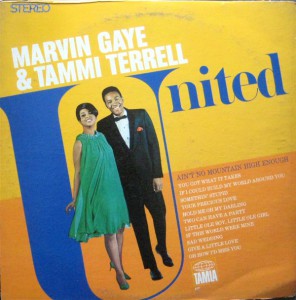 Of the numerous ‘duet’ albums Marvin Gaye recorded (including two other sets with Tammi Terrell), 1967’s “United” was probably the most consistent and enjoyable of the group.  Terrell was clearly the female partner with whom Gaye had the most chemistry and it showed throughout about two thirds of the album; the other third falling victim to Motown’s typically lame efforts to attract a MOR white audience.  At least on record the decision to put the two together was almost magical.  Terrell didn’t have the world’s greatest voice, but she knew how to use her talents and she was a perfect partner for Gaye adding a sassy element to his cool, controlled performances.  Co-produced by Harvey Fuqua and Johnny Bristol, the two producers had the insight to recognize that Gaye and Terrell would be best suited by an upbeat, soul-oriented sound.  As a result they managed to keep Berry Gordy’s affection for over-produced slop to a minimum.  To their credit, Gaye and Terrell even managed to salvage some of the lesser material – ‘You Got What It Takes‘ – were actually listenable.  Unfortunately ‘Somethin’ Stupid‘ (‘c’mon why would anyone even think about covering and Frank and Nancy Sinatra song?) and ‘Sad Wedding‘ were simply too lame for anyone to save.

So what were the highlights?  Clearly the three hit singles (including  two Ashford and Simpson numbers) that were spun off the parent LP:

Almost as good were the  ‘Two Can Have a Party‘ (which was originally recorded as a Terrell solo side with Gaye subsequently adding his vocals), ‘Little Ole Boy, Little Ole Girl‘ and ‘Give Me a Little Love‘.   Yeah it doesn’t hit new heights in terms of creativity, but so what.  The pair’s flirty relationship repeatedly came through making the album a pleasure to hear. 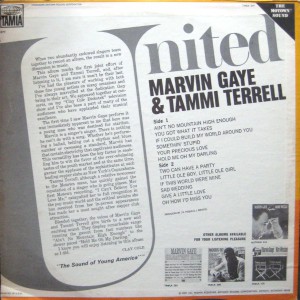 As a recording artist Marvin Gaye had two, quite, separate, incarnations, both equally popular but not necessarily appealing to the same fan-base. After a string of hits, culminating in I Heard It Through The Grapevine, Gaye broke free and within a couple of years conquered the world anew with the ground-breaking What’s Goin’ On. From happy-go-lucky loafer to socio-political philosophiser is, of course, a disingenuous over-simplification, quite probably he had always been both.
How refreshing, then, to be able to suspend judgement (and belief) and take, at face value, his role as the happily domesticated other half to the delightfully perky Tammi Terrell. That these two chic city sophisticates never actually had a romantic attachment probably works to an advantage in so much as it frees us from the temptation to dig under the surface, there’s no need, this is a fairy tale and nothing more, happy endings are virtually guaranteed.
All this could so easily have been a recipe for artistic disaster but the ingredients blend perfectly and, after all, Motown rarely failed to deliver a quality product. As far as the material is concerned, the new song-writing teams of Ashford/Simpson and Fuqua/Bristol are more suited than some of the writers on Gaye’s previous albums but I like these duets in particular because of Gaye and Terrell’s convincing rapport; she’s a woman who knows her own mind and he’s a man who has to tread carefully, this nervous tension almost lends an unintentional authenticity to their role playing, she taunts him and he laughs it off. 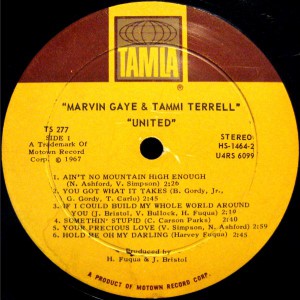 As you might expect, the album is full of uptempo love songs brimming with optimism and coming from a place where infidelity had not yet been invented. Ain’t No Mountain High Enough is the obvious big hit opener but You Got What It Takes sets the tone for the album with its message of unconditional love – no matter that his purse is empty or that nature didn’t give her such a beautiful face (!). Somethin’ Stupid is the only downer on side one and seems a little out of place. Side two is stronger with a run of classics including the infectious Two Can Have A Party and the sensitive If This World Were Mine, a Gaye composition with a beautifully ornamented production. Two more high-lights are Sad Wedding and Give A Little Love where Gaye and Terrell’s glorious harmonies exhibit a compelling simplicity.
All the elements of Motown’s professionalism are brought to bear, they may have run a tight ship but no expense is spared regarding these arrangements. The fluid rhythm section drives everything, brass and string sections fill out the mix, there are jazzy flourishes on piano, crisply recorded guitars, shimmering organs and sparkling harpsichords all worked closely together but still loose enough to feel relaxed.

It’s the perfect setting for two great performers who sound like they’re enjoying every minute of it.