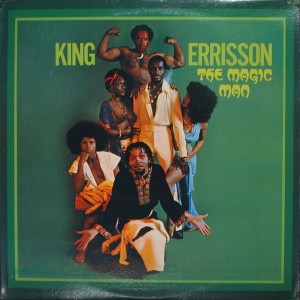 The Bahamian percussionist’s two sought-after albums recorded for the Westbound label. “The Magic Man” was released in 1976. “LA Bound” came out in the following year.

Produced by Dennis Coffey and Mike Theodore, this is serious percussive magic, full of great proto-disco grooves with plenty of drum breaks that call out for sampling.

The voodoo-themed “The Magic Man” sees the team take on mixture of funky disco originals and key cover versions such as the Ohio Players’ `Sleep Talk‘.

“LA Bound” includes the incredible `Well, Have A Nice Day‘ as sampled by Roxanne Shante on her hip-hop classic of the same name. 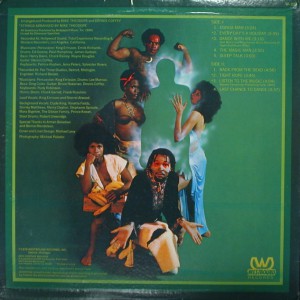 Errisson was not only David Axelrod’s first call for the percussion chair, but he was the first choice for most discerning West Coast producers. King Errisson’s own website lists around 20 albums which feature his percussive skills; these demonstrate his versatility, but are in fact a rather small snapshot of his true workload. He made dates for both Axelrod and the Mizell brothers, the very top of great fusion production, and also appeared on the experimental rock of Tim Buckley’s “Sefronia” and the bubblegum pop of David Cassidy’s big hits. The demand for his talents as a session player limited the time available to pursue a recording career under his own name; these two LPs charts his late-70s emergence as a leading man.

In 1976 King Errisson signed with the Detroit independent label Westbound, who had been having success with Funkadelic, the Ohio Players and the Detroit Emeralds and who had just employed Mike Theodore and Dennis Coffey as producers with an eye to the new disco sound that was emerging from the clubs. This was a distinct attempt by Errisson to forge a career as a name artist. Both his Westbound albums were hooked around a concept. They were recorded in both Los Angeles and Detroit. The Los Angeles sessions saw the producers and King Errisson take advantage of their full address books, as some of the biggest names in the industry, including Paul Humphrey, James Gadson and Patrice Rushen, appear on the album.

The first album, “The Magic Man”, has a striking cover with Errisson cast as some sort of Lord of the voodoo, reflecting the musical concept. On the back of the LP cover Errisson is so magical that he has made himself disappear! The disco grooves of this album are built around a very funky back beat augmented by his congas and dense musical arrangements. The cover of the Ohio Players’ ‘Sleep Talk’ is an absolute monster, while ‘Back From The Dead’ appears to be summoning monsters.

“L. A. Bound”, from 1977, offers a different perspective; it is lighter and more upbeat. In many ways it shows how far the general sound of disco had evolved in the year between his first and second Westbound album. The concept this time is of Errisson’s journey from the Bahamas to Los Angeles. It featured a sizeable club hit in “Manhattan Love Song“. Nowadays the album is remembered for the track ‘Well, Have A Nice Day’ which provided the main sample behind Roxanne Shante’s hip hop classic ‘Have A Nice Day’. 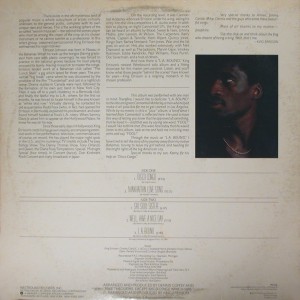 Errisson’s lack of input on the “Magic Man” is corrected here. The fact that the material is also a bit more consistent and based exclusively on originals, makes it a slighly better record than “Magic Man”. L.A. Bound kicks off with the lovely “Disco Congo” which truly emphasize Errisson’s Bahamian roots. That track is cool but it doesn’t hold a candle to the goergous “Manhattan Love Song” (One of Mike and Dennis best production moments). The song has the feel of an anthem and would’ve sounded at home at Studio 54 (If I was Steve Rubell and heard this, I would’ve at least told the DJ’s to keep it on their playlists). There’s also a lot of breakdown sections that’s worth repeated plays and you can really hear Errisson do his stuff and show you why he was Dave Axelord’s number one choice for a precussionist. Then there’s the other track that disco lovers treasure from this album, “Well, have a nice day” which contains some well written lyrics by Cleaveland Horne (Fantastic Four) and a dead on delivery from Charles Clark (Cj& Co). the track is a smooth slice of disco funk which follows the same formula as the other songs with breakdown sections and and an emphasis on precussion. The title track and “Salsoul sister” may not reach the hieghts of the other three tracks but they’re still impressive. Overall L.A. Bound is a King Errisson’s best album from Westbound. Mike and Dennis production style along with Tom Moulton’s mixin’ doubles the pleasure behind the mixin’ board.

After his period with Westbound, Errisson formed his own label Errisong. He has continued to release his own Caribbean-flavoured jazz records and has just released his newest album “Smile” on the Acklins label. Now well into his 60s he still performs live dates as a leader. He remains an in-demand percussionist, and continues to play with Neil Diamond, whose band he joined in 1976. It’s a pleasure to be able to get these two wonderful albums out on CD. Dean Rudland, 2006.