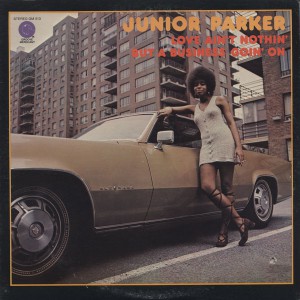 Mr Magic Blues makes a ’70s soul classic and Mr.Moo kindly offer it to us.

Yes his classics from Sun Records have there own place, but do not be misled by this man’s long history in the music business, this album from the 70s, is brilliant,wonderful soul, funk, blues etc. so many good tracks and great covers eg of Beatles ‘taxman’ is great; and ‘outside man’ among  others make this album a classic as well as the iconic artwork- a great all rounded.

This is a @320 vinyl rip (supplied by Mr.Moo) of the original Groove Merchant LP including covers 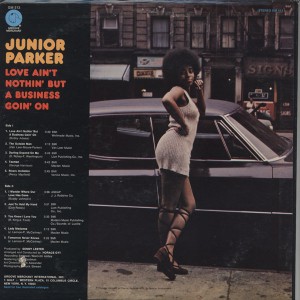 Herman Parker Jr. was born at the heart of the blues in Clarksdale, Mississippi in 1932. He died tragically young, from a brain tumour in 1971. In between, he produced some of the most soulful blues of the ’50s and ’60s. Mentored by Sonny Boy Williamson and Howlin’ Wolf and talent-spotted by Ike Turner, Parker started out as Little Junior who, with The Blue Flames cut the riotous Feelin’ Good and the eerie Mystery Train for Sun Records. Parker’s downhome late-’50s sides for Duke brought him success but when he moved away from hard blues he lost his audience. As a result, most scholars tend to write off Parker’s later, more soulful sound. This is a shame as his final recordings contain some of the most warm-heated sunshine soul of the period. Cratediggers rate this album (alt. titled Outside Man in its Capitol incarnation) because of Sonny Lester’s clear production, and in-the-pocket groove from Jimmy McGriff’s soul-jazz combo and Parker’s three Beatles tracks – Taxman, Tomorrow Never Knows and Lady Madonna – where the singer’s good-hearted character cuts through the clichés, even going so far as to blanche at the meanness of George Harrison’s lyrics on Taxman (“Oh, this is awful!”).

Also worth tracking down is Parker’s glorious cover of Ain’t It Funny How Time Slips Away from the same period; an epic spoken-word reworking of the Willie Nelson country classic that deserves to sit alongside such other soul overhauls of white radio standards as Isaac Hayes’ By The Time I Get To Phoenix and Bobby Womack’s cover of The Carpenters’ Close To You.

Conversation for album: Junior Parker – 1971 – Love Ain’t Nothin’ But A Business Goin’ On