One of the coolest club records ever cut – and one with a great gimmick too! That gimmick is the “hotel sheet” – an instrument created by percussionist Jack Ashford, which is a light piece of metal that’s snapped back and worth to create these cool wibbly, wobbly waves of sound – almost like a moog at times, which gives some of these tracks a bit of a P&P Records vibe! Ashford was a member of The Funk Brothers – and a percussionist on countless classic Motown sessions – but this album was recorded in LA with a sweet electric groove, and a mix of strings and funk that almost rivals Jack’s only other full album – a rare blacksploitation soundtrack. The set features full arrangements from Paul Riser, orchestrations from Gordon Staples, and the whole thing was recorded at the Marvin Gaye studios – which you can almost hear in Ashford’s surprisingly great vocals. 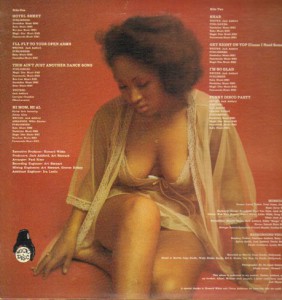 So Jack Ashford was a member of Motown’s famed Funk Brothers band and played percussion on hundreds of the label’s songs (every self-respecting music fan should see Paul Justman’s documentary “Standing in the Shadows of Motown”).  I knew Ashford had done some mid-1970s production work for the likes of The Mighty Clouds of Joe (I own a couple of those albums), but I was unaware of this solo side.

So here’s a perfect case of the old adage “never judge a book by its cover”.   At least on the surface, 1977’s “Hotel Sheets” doesn’t look all that promising – small name label (Magic Disc), tacky and sexist cover, un-inspiring song titles …    Co-produced by Ashford and Art Stewart, I’ll tell you the album isn’t perfect, but it’s seldom less than entertaining.  This is all speculation on my part, but I’m guessing that after all those years in the background, by the mid-1970s Ashford was simply exploding with creative frustration and the need to show off some of his talents (dammit I can do more than shake a tambourine).  And judging by this album, its hard to figure out how Motown would have missed Ashford’s other talents.  In addition to writing all eight tracks, Ashford had a wonderful voice.  Deep and soulful, he was every bit as good as some of Motown’s better known solo acts.   The album was also notable for featuring support from several of Ashford’s Funk Brothers brethren, including percussionist Eddie Brown, keyboardist Earl Van Dyke, and guitarist Wah Wah Watson.  Musically this wasn’t particularly adventuresome with Ashford trolling through a mixture of upbeat, disco-tinged dance numbers, a couple of more pop-oriented tracks, and an occasional nod to the blues.  That said, the performances were all solid and a couple of these were real keepers.

The title track was a formulaic slice of disco madness saved by Ashford’s growling voice, a funky rhythm guitar, and some bizarre percussion effect. So if Donna Summer’s ‘Love To Love You Baby’ made you blush, then parts of ‘I’ll Fly To Your Open Arms‘ were likely to cause you the same problems.  A mid- tempo ballad complete with moaning females and suggestive, borderline lewd lyrics, this one sounded like Barry White overdosing on Viagra. One of the standout performances, ‘This Ain’t Just Another Dance Song‘ was a dazzling number that should have attracted attention from dance club and top-40 radio.   Built on an instantly captivating melody, the song also had a great bass line and one of Ashford’s best vocals.  I find myself humming this one all of the time.

The instrumental ‘Hi Mom, Hi Al‘ found Ashford showcasing a bluesier style; in this case setting up a showcase for guitarist Watson to spotlight his talents.  Great track and my only complaint here would be the song faded out too early.  By the way, the title was meant as a nod to his mother (Thelma) and brother to whom the album was dedicated. Starting off side two, musically the ballad ‘Shar‘ sounded like something off of one of a mid-1970s Isaac Hayes blaxploitation soundtrack.  Funny, but vocally Ashford’s multi-tracked vocal actually sounded a bit like Bill Withers.   Highly commercial and radio friendly.  Another album highlight.

While it took awhile to work it way through the new age noodling, ‘Get Right On Top (Cause I Need Someone)‘ finally broke out into a surprisingly funky dance number. Lyrically this one wasn’t going to win Ashford any awards, but it sure did have a catchy melody and Jerry Knight’ bass work was simply dazzling. Even though Ashford wasn’t featured on it (just female backing singers), the bouncy ‘Baby I’m So Glad‘ was the song that came closest to capturing the classic Motown sound.  With a little work this one could have been a hit. Complete with party sound effects, it sure started out sounding like a ‘Funky Disco Party‘ …  The funny thing is the song was actually built on a slinky blues groove.  Yeah, the party crowd sound effects quickly became irritating, but the rest of the track was pretty cool.

The title track was released as a promotional 12″ single.  It’s become highly sought after by collectors and will actually cost you more than the parent album. The album was also apparently reissued with a modify, slightly less risqué cover.