J. R. Bailey has been an obscure name even in well-informed Soul circles. Nevertheless, he’s one of the few Soul artists who mastered an urban, sophisticated, jazzy Soul style. His style resembles most closely Leroy Hutson, Leon Ware, and Marvin Gaye, especially from Marvin’s “What’s Going On“, “Trouble Man“, and “Let’s Get It On“ days.

The songs are based on chords consisting of thirds (up to five) stacked upon another, which shift and modulate from one minor harmony to the next. Rhythm guitars and a bouncy bass guitar lay down a funky groove, congas add a Latin touch, strings provide a satin flavor, the vibraphone and the harmonica add spice, a tenor saxophone reminds us of the jazzy footing of this production, a brass section takes it to the big stage, and in the midst of this all, J.R. Bailey scats, and sings in sweet harmonies accompanying himself. He doesn’t always excel with a perfect pitch, however, he does what he does convincingly and with the kind of self-confidence needed in such an urban setting, and he’s the main composer on this album. Besides, the charm of this record is its mellow mood created by all the ingredients.

Just Me N’ You has been a sought after collectible. And it’s still worth every calorie invested while tracking down this Soul gem. It was re-released on CD in 2006. 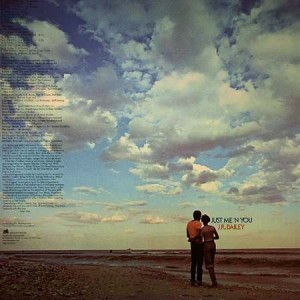 I won’t lie… I heard this album for the first time just a few days ago, and it is… mind blowing.
If you’re into Leroy Hutson and Willie Hutch The Very Best of Willie Hutch in particular, you’ll really dig this…
I really don’t know how to put words to it… so let me give you some backround:

The album was released by MAM records in 1974, a label that I believe was co-owned by Tom Jones.
As for the man of the hour: J.R. Bailey was a singer/songwriter who got his start performing with The Cadillacs. Two of the most famous songs he penned included “Everybody Plays The Fool” (Main Ingredient) and “Love, Love, Love” (Donny Hathaway)… He can be heard as a back-up singer on countless album by the likes of Aretha Franklin, Donny Hathaway, Joe Simon, Ben E. King, Ike and Tina Turner, The Three Degrees and a bazillion others – including a favorite organ groove album of mine: Got to Get Your Own by Reuben Wilson and The Cost of Living.

As for his vocal style… think elements of Marvin, Donny Hathaway even Lenny Williams of Tower of Power fame – but a guy doing his own thing… Although a raw and commanding soul singer, a guy with stunning chops too, as demonstrated by some of the wicked Jazz chops in his singing. I’m sure the reason why he stayed behind the scenes (until his untimely death in 1980) will be just as much a mystery to you… because when you listen to his music you sense that he must have been one heck of a nice guy, yet ridiculously gifted musical genius.

And I mean it… I’m not exaggerating ! 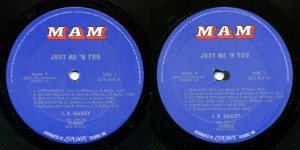 This was originally released in 1974 on MAM Records.

Here you have the opportunity to listen to an album that might have escaped your attention, and undeservedly so. This is an album influenced by Marvin Gaye, his seminal 1971 ‘What’s Going On‘ permeates the entire project, which was clearly conceived as a fellow concept album, a paen to love (in comparison Gaye’s album was primarily concerned with the society he witnessed around him). The influence can most clearly be heard in the lush orchestration, and the way in which the songs have been produced to flow seamlessly in to each other, thus creating the impression of a musical tapestry. This is particularly true of the opening suite, which includes ‘After Hours‘ and ‘Heaven on Earth‘, and which is taken up again in ‘She Called Me‘.

Despite this the real gem on this album is Bailey’s recording of ‘Love, Love, Love‘ (previously recorded by Hathaway), which Bailey had written for Hathaway. This is a fantastic recording, and would, by itself, make buying this record worthwhile. The fact is that Bailey was a credible artist with a long involvement in the various predominantly black musical genres which existed prior to the album being recorded, and Bailey draws upon this heritage in each song. This heritage allows Bailey to produce an album that is suitably sophisticated to warrant repeated listening, to discover the subtle shading that can be found throughout in small, often discreet, flourishes. And all this is held together by Bailey’s voice, which is strong enough to convey that sense of pain and longing which is such an essential component of real soul music.

Produced in the early 1970’s, the album does, however, carry cultural markers from that period, which can sound stylistically anachronistic (women are ‘chicks’ or ‘broads’). But there are also moments of humour – ‘She Called Me’ features the oddest recording of kissing that you are likely to hear – but it should make you smile.

But, these small points aside, this is a recording which offers a joyous celebration of love, in a recording that truly places this album in the company of ‘What’s Going On‘ and Leon Ware’s ‘Musical Massage‘.

Available on cd or vinyl, this is an album that every true lover of soul music should own. It is truly a special album, and once again Soul Brother Records deserve praise for making this recording more easily available.