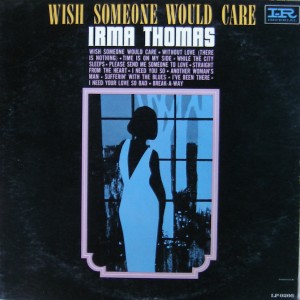 A legendary soul album of the 60’s. The unrivaled Soul Queen of New Orleans.

Take A Look at Irma Thomas and you’ll be taking a look at an outstanding talent. [[Irma Thomas]] is in that special category of recording artists who knows what the word interpretation means. She is able to take lyric and melodies, some of which are written by her, and give full vibrancy and feeling to their meaning.

On Wish That Someone Would Care, Irma‘s in excellent form alongside some killer arrangements from HB Barnum all in a groove that takes New Orleans roots and mixes them with a greater sense of power and majesty an approach that’s a bit like some of Solomon Burke’s work over at Atlantic Records at the time, but with an obvious female soul spin overall. Barnum’s tight arrangements also open up Irma‘s sound in a way that some other arrangers could never reach and the album’s a killer through and through 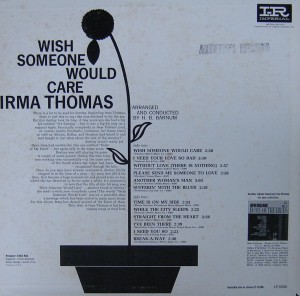 Wish Someone Would Care is marked by the skills of noted arranger H.B. Barnum, who isn’t afraid to give Thomas the sonic support needed to make the most of her versatility. She illuminates the deeply soulful “I Need Your Love So Bad” and the remake of Percy Mayfield’s “Please Send Me Someone to Love.” However, she is probably best known for “Time Is on My Side” which resurfaced as a British Invasion hit for the still-wet-behind-the-ears Rolling Stones. Much closer to home, Thomas racked up kudos for her take on Jackie DeShannon’s “Break-A-Way,” again influencing a Brit as Tracey Ullman gave it an overhaul to great effect.

It’s because of powerful platters such as this that vocalist Irma Thomas would rightfully garner the crown as the undisputed Queen of New Orleans’ thriving R&B scene. She established her reputation as a no-nonsense soul sister with the attitude-driven “You Can Have My Husband (But Don’t Mess with My Man),” “A Good Man,” and the regional hit “Look Up” prior to landing at the Crescent City powerhouse Minit Records. It was there she joined forces with the musical wunderkind Allen Toussaint who provided Thomas her next batch of notable sides, specifically “It’s Raining” and “Ruler of My Heart” (aka “Pain in My Heart”). She was also among those to make the transition to the significantly larger Imperial Records after they purchased Minit in 1963. Wish Someone Would Care (1964) was the first of two long-players that Thomas released during her brief (1964 — 1966) run on the Imperial roster. The album opens with the yearning torch balladry of the title track “Wish Someone Would Care” featuring Thomas supported by the inimitable H.B. Barnum, who tempers her remarkably versatile voice in the first of several sensitive arrangements. “I Need Your Love So Bad” is reflective of the guttural and bluesy style commonly associated with the likes of Otis Redding and James Brown. Here, Thomas definitely gives the boys a run for their money. The melody of “Without Love (There Is Nothing)” bears a striking resemblance to the “Tennessee Waltz” during the languid verses. The chorus, however, finds Thomas calling on her gospel roots to really “sell” the performance to great aplomb. Her update of Percy Mayfield’s “Please Send Me Someone to Love” is a stone classic and easily takes on Odetta and Esther Phillips’ respective versions with plenty of power to spare. “Time Is on My Side” — initially relegated to a 45 rpm B-side — found its way across the Atlantic ocean where it would take on a life of its own once the Rolling Stones covered it less than a year later. Similarly, Thomas’ reading of the Jackie DeShannon co-penned “Break-A-Way” became a runaway smash throughout the bayou. And though it seemed to attract little attention elsewhere in the States, it has been remade to great effect by Tracey Ullman. Both the LP and single for Wish Someone Would Care crossed over onto the pop charts, simultaneously giving Thomas her only Top 40 single and Top 100 Album entry.

Listen up The Queen of The New Orleans

I would like to thank cafecafecafe who cleaned this vinyl rip perfectly and Raphy for his support.

This post is dedicated to the people of New Orleans

Conversation for album: Irma Thomas – 1964 – Wish Someone Would Care