I recently happened to listen to this vinyl and felt so overwhelmed and such a joy. This LP shows that music is not just interpretation and hits but also send messages. And the messages of this LP are not only timely but also so important.

I’ve always like Gamble and Huff and I adore Philadelphia sound. Especially here that is performed by a superb group where the outstanding vocals, apart from their undoubted quality, are combined so harmonically together.

I love Little Sonny’s unique voice, it has been described by some in the industry as a nasal voice, and had also a unique way of singing: seems as he cry and also as he speak. I only find a little resemblance with some moments in some songs by another great little: Little Anthony.

This is a nice @320 vinyl rip of my original Gamble LP. 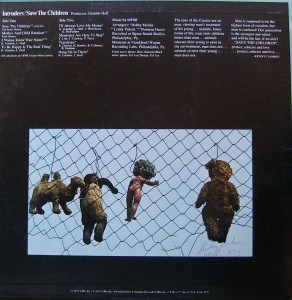 No argument — this is the best Intruders album, other than their greatest-hits compilations, ever released. Little Sonny (Sam Brown) returns to join his buddies, Phil Terry, Eugene “Big Sonny” Daugherty, and Robert “Bird” Edwards, after an unexplained hiatus. “Save the Children” is a socially significant floater where the guys’ voices ride the waves of MFSB’s fantastic sound. Gamble and Huff spotlight the return of Little Sonny on “I Wanna Know Your Name“; the song employs a convincing rap by the singer. It also became a popular remake, as versions by the Force MD’s and Wallace & Scotty (of the Whispers) have since been waxed. “To Be Happy Is the Real Thing” and “Hang On In There” are two upbeat, positive-thinking songs that make you feel better about yourself. The Philadelphians reveal their doo wop roots by doing a credible rendition of Lee Andrews and the Hearts’ “Teardrops.” The cream is the spirited, tear-inducing “I Always Love My Mama“, the best mama song ever. The Intruders rap about their teen years during the break before the song builds to a frantic end. A mellow rendition of Paul Simon’s “Mother and Child Reunion” shows the group’s versatility(AMG).

A classic album from this incredible Philly soul group! The Intruders were one of the first groups to work with the Gamble/Huff team — and their sides for the team from the 60s have an amazingly professional approach to harmony soul, never afraid to hit a good hook or go for a strong image to sell a song, yet still quite raw and honest in the vocal department, where things really matter. This record is one of two late albums they recorded once Gamble & Huff had gotten a bit more fame and a lot more money — and it’s an interesting transition to the slicker Philly International mode of the 70s. The band make the transition wonderfully, though — and even though they’re couched in tight MFSB orchestrations, the vocals shine through brilliantly, with a less-polished quality that’s a welcome change from some of the other Philly groups of the time. The big cut on the album is the band’s famous tribute to motherhood — the long groover “I’ll Always Love My Mama“, which has some of the sweetest lyrics you’ll ever hear on a Philly soul album — and which is served up here in the extended version that features some great talking near the end! But most of the rest of the cuts are fantastic, too — like the group’s wonderful version of Gil Scott-Heron’s “Save the Children“, and the great ballads “I Wanna Know Your Name” and “To Be Happy is the Real Thing“.

You can find the extremely rare and superb Intruders “Cowboys to Girls“ album in our back pages.

Buy the AlbumIntruders – 1973 – Save The Children

Conversation for album: Intruders – 1973 – Save The Children