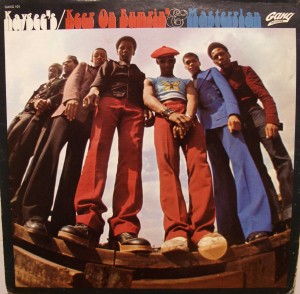 The Kay-Gees’ greatest LP and far and away better than anything else they ever did! Grabbing up this one is like finding a lost Kool & The Gang LP from the early years which is no surprise, since Ronald Bell of the group produced it and wrote a lot of the songs with the group. The band are incredibly tight instrumentally – with lots of hard drums, choppy guitar, and the rolling party feel that made Kool & The Gang so great during their best years. There’s some great horns that blast in and out, sounding very off-beat at the best moments – like the classic “Who’s the Man With the Master Plan”, sampled by YZ many years ago – or other funky cuts like “Ain’t No Time”, “Get Down”, and “You’ve Got to Keep on Bumpin”. 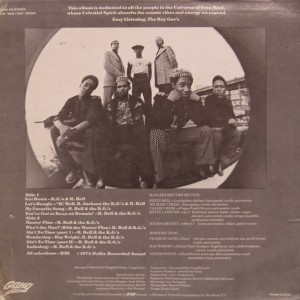 The debut LP from Kay-Gee’s proved that the band led by Kevin Bell (brother to Kool & the Gang’s Ronald) had all the deep, driving grooves, kinetic energy, and street-corner vibes of funk’s master outfit. Produced by Ronald Bell and Kool & the Gang, Keep on Bumpin’ & Masterplan featured a pair of strong lead tracks and plenty more strong material, like “Hustle Wit Every Muscle” (used as the theme song to the television show Party). The Kay-Gee’s’ horn section was equal to Kool & the Gang’s, and if they lacked a few of the awesome hooks that propelled Ronald Bell’s group into the R&B charts on a regular basis, alto/soprano Pete Duarte was a superior soloist and female vocal trio Something Sweet filled in the gaps on the great jam “Let’s Boogie” and “Wondering“. Kay-Gee’s were also better at locking into great grooves, while Kool & the Gang spent too much time mixing up their style. True, a Kool & the Gang singles collection would blow Kay-Gee’s’ out of the water, but even they never recorded an album as good as Keep on Bumpin’ & Masterplan. ~ John Bush, All Music Guide.

A funk outfit formed in Jersey City, NJ, Kay-Gee’s had some valuable mentors in Kool & the Gang — specifically Ronald Bell, who was happy to serve as producer, arranger, and sometimes songwriter for his younger brother Kevin‘s band. In addition to Kevin Bell on guitar and several other instruments, Kay-Gee’s featured saxophonist Peter Duarte, brass player Ray Wright, woodwind player Dennis White, keyboardist Kevin Lassiter, bassist Michael Cheek, drummer Callie Cheek, and percussionist Wilson Beckett. Signed to Kool & the Gang‘s own Gang imprint, Kay-Gee’s issued their debut album Keep on Bumpin’ & Masterplan in 1974. With Ronald Bell penning the majority of the material, Kay-Gee’s’ sound was highly similar to the hard, tight grooves of early Kool & the Gang; singles like “You’ve Got to Keep on Bumpin‘,” “Who’s the Man? (With the Master Plan)” (yes, the source of that ubiquitous hip-hop sample), and “Get Down” gave them an enduring reputation among hardcore funk connoisseurs.

Burn Me Up followed in 1975, producing the single “Hustle Wit’ Every Muscle“, which became the theme song for the TV series Party. By the time of 1976’s Find a Friend, Ronald Bell‘s involvement with the group had begun to decrease, resulting in a flirtation with disco on cuts like “Find a Friend” and “Waiting at the Bus Stop“. Their final album, 1978’s Kilowatt, was a full-fledged disco-funk extravaganza released on New York’s De-Lite label, and featured several popular club singles, including “Cheek to Cheek” and “Tango Hustle“. However, they disbanded not long afterward.

Conversation for album: The Kay Gees – 1974 – Keep On Bumpin’ & Masterplan