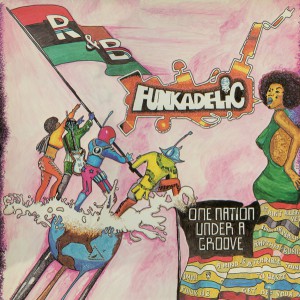 This album is incredible, truly one of the greatest records in pop music history. To put it simply, it is an album that defines a genre. Of course there are older funk albums which laid out the groundwork, but ONE NATION was a recording that combined the various elements that Funk music had incorporated over the years and crammed it all into one amazing album.

The chaotic groove of the bass guitar, the electric screech of the electric, the satirical and over the top lyrics and vocals, the use of synthesizers and Indulgent keyboard technology; these were all elements that the P-Funk music collaborative, led by George Clinton, had been developing in their music for years. This album has it all. The first track, is in my opinion, P-Funk’s pinnacle song. But every cut is a frigging gem.

I’m not going to go on too much about how amazing this album is. The point is, if you consider yourself an expert of popular music, then this album is a staple of any collection. Buy it, download it, pirate it, whatever, just please- have this album available to listen to at all times! I guarantee, like any great funk music, it will always put you in a good mood. 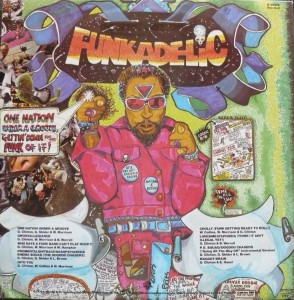 P-funk is sometimes referred to as Clinton’s funk collective, and One Nation Under A Groove is where this concept first becomes undisbutable. He had been running Parlament and Funkadelic for years as two units, but the more they shared musicians and ideas, the less the demarcation made sense. So why not gather the whole caravan together for a masterpeice: Here it is, the whole gang’s gift to you.

If you think of it, the process that lead up to “One Nation Under A Groove” is not unlike what lead up to the Temptations “Cloud Nine “in 1969. Listen to all of the albums since “Maggot Brain”, and you’ll notice that the music becomes more and more spacious. First to go were the wha whas and acid declorations, then the heavy eccho. A lot of this had to do with the 1960s ending.

But if taking out, also put in. All this new room allowed for more percussion, more back up vocals–sans the eccho–and fatter bass. The music became lean structurally, but a lot more smaller sounds like cowbells, synths. a random vocal overlap here and there, moved within these big song frames. You hear this on the first track, and on “Enima Squad.” The music becomes more layered and textured than ever, once the outmoded was removed. 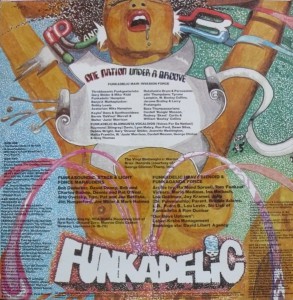 All this does not explain why this is a classic album. The band is extremely tight, but extremely loose, very controled, but very spontaneous. There is a lot of improvasation going on, and listening to the guitar crash into the vocals which bump against the bass and keyboards give all this music a sense of jazzy, funky, over-the top celebration. Yet the rhythms section is tight, stays to its pattern, and is extremely disciplined The concepts here are great, but it is the way everything jells once the tape is rolling that make “One Nation” the king of funk albums.

Music was getting more danceable by the day in 1978, when this arrived, and I am sure it would have been effortless for Clinton to get strings sections and pander. Instead, he gave Disco a big plastic finger, and created a music that was MORE driving, MORE foot stomping,
and MORE rump shaking. Yet it rocks with its heavy guitars and political attitude.

There is a reason disco is being sold, song by song, on TimeLife comps to aging yuppie moms, while young people are still listening to this ALBUM. They ask about 70s funk, and we hand them One Nation Under A Groove.

That, my friends, is called a Classic

You can also enjoy their masterpiece “Maggot Brain” in our back pages here.

Buy the AlbumFunkadelic – 1978 – One Nation Under a Groove

Conversation for album: Funkadelic – 1978 – One Nation Under a Groove