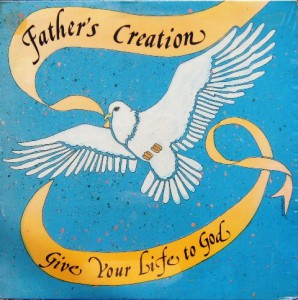 The only album by Father’s Creation, it nestles very comfortably in the modern soul/rare groove bag. Dominated by the progressive sound of the emergent indie soul music sound of the early 80s, this works that lovely warm, unconventional magic that has since become so collectable. “Give Your Life To God“ has a message that combines both spiritual elements with more hard hitting lyrics about the sign of the times, making it so much more than a Gospel LP.

This is a real treasure that everyone should enjoy.

It’s 1983. The cynical trappings of disco are wearing very thin and soul music is now embracing the awesome power of the synthesizer as a cheap alternative to a full band or orchestra. And with the demise of the monotonous thud thud and the shrill of an occasional chorus came the revival of independent soul. High calibre, vibrant soul carrying the banner for non-formularised, gutsy music on obscure, often one-off label sources. And with its popularity gaining respect by many real soul radio stations, these sounds were getting to the masses in ways that the vinyl never could.

Father’s Creation seems to have captured many of those enduring qualities that have stood the test of time far more easily than their more commercial counterparts. In their ranks, they had David K Bouknight (lead vocals, drums), William Campbell (lead vocals, drums), David Dilliard (percussion), Tyrone K Brooks (keyboards, bass) and Tracy Davis (lead vocals). Their LP entitled “Give Your Life To God“ was a one-off album released on Creation Records and was recorded in Clinton near Washington DC. Although a Gospel album, the message is more generic about how to live life according to moral codes making it more appealing to a wider audience. A tight knit unit, all songs penned and produced from within the band, it is self-evident that this union had something special about them. 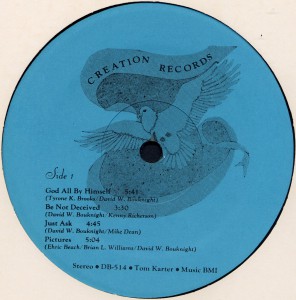 The opening bars of “God all by myself“ puts many of their wares on the table. Creative chops, fertile ivories, intriguing and inspired chord and rhythm changes all coincide to create an insidious, hypnotic quality. There is a fresh almost naïve freedom percolating through high production values that never appear compromised. Topped off with clear confident vocals from William Campbell, this really was a fresh of breath air back in the day. And we really are treated to something ultra rare in “Be not deceived“. The perfect rare groover. Reflective lyrics combine with great vocals, harmonies and production to make your heart rejoice at its connection with your auditory system. “Just ask“ is another great track with a mix of tenor (Campbell), falsetto (Bouknight) and female (guest contribution by Laverne Day) vocal leads all working an unconventional spell. “Pictures“ is a gentle throwback to those sumptuous ballads that were hidden amongst a glut of funk on albums for bands like Mass Production, BT Express, and early Slave.

And while I don’t personally care for Tracy Davis‘s nasal vocal quality, not unlike that of pre-teen male singers, “Count up the cost” still has a undeniable charm. “Give your life to God“ is a gentle ballad that really improves on repeated listens where its subtlety starts to dig deep. “Work on it“ is a pleasant ballad, and we round it all off with the vibrant “This world“ – a wonderful ‘concept’ piece with clever changes in pace. And that would appear to be that. I managed to locate some Gospel songs written by Thomas Brooks, some in collaboration with David Bouknight dating around 1986. Mr Bouknight would appear to be still active in and around Washington, with a release on CD Baby entitled ‘When I look to you‘ in 2009. One of the tracks on that EP is entitled ‘Father’s Creation‘.

Please do not be put off by the ‘gospel’ tag, for this is a real treat to be enjoyed by both religious and secular audiences alike in our common appreciation of what soul music is all about.

Extremely rare killer album, never released on cd. You can buy the only available vinyl copy for 100 € here.

Conversation for album: Father’s Creation – 1983 – Give Your Life To God