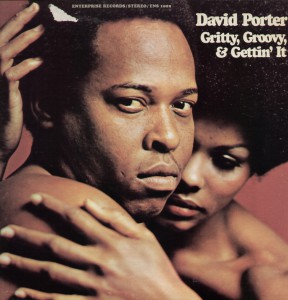 His first LP on his own, with production by Isaac Hayes, backing by the Bar Kays, and lots of nice cuts that have a produced soul sound that’s similar to some of the stuff that Ike was doing at the time. Although he was best known as part of the song writing team of Porter/Hayes, this LP, like Ike’s early ones, has mostly material written by other composers. Unlike Ike’s LPs, which had mainly pop stuff done in a soul style, the tracks on here are a good batch of soul classics, like “Im A Telling You”, “I Only Have Eyes For You”, and “Just Be True”.

This a @320 vinyl rip of the original Stax records LP including covers. Never released on CD.

David Porter is most famous as the songwriting partner of Isaac Hayes during the 1960s. Functioning as house composers for Stax, they penned most of Sam & Dave’s hits, including such classics as “Soul Man” and “Hold On! I’m Coming”; they also wrote material for other acts on the roster, such as Carla Thomas, Johnnie Taylor, and the Soul Children. Starting in the late ’60s, Hayes became increasingly involved in his own recording career, eventually leading to the end of the partnership. Many soul fans remain unaware that Porter also began to record his own albums for Stax. In fact, in the ’60s he had released a few singles for Savoy and Hi under the pseudonyms of Little David and Kenny Cain, and had done a single for Stax itself in 1965, “Can’t See You When I Want To.” A remake of “Can’t See You When I Want To” became a Top 30 R&B hit for Porter, and he cut several albums for Stax in the early ’70s, including an ambitious concept LP, Victim of the Joke? which connected conventional pop/soul tunes with dialog. By this time he had teamed up with a different songwriting partner, Ronnie Williams, but as a solo artist he ultimately made little impact.

Listen up the wonderful “Can’t See When I Want To” 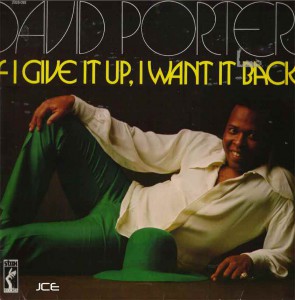 It’s really a mystery what is happening with this album. AMG do not include it in David Porter’s discography. Neither Stax as you can see. But…look at the cover with the STAX label.

On the other hand his ” Victim of the Joke?: An Opera” album contains the same songs as concept album of sorts, the songs linked together by dialogue based around a thin romantic plot.

So i really can’t understand what is happening. Probably “If I Give It Up, I Want It Back” released first but soon disappeared or failed and later David decided to make it again as an opera. I would be grateful if anyone can help to solve it.

This is a @192 vinyl rip of the original Stax Records LP. Never released on Cd.

You can play a game with this record. Its called ‘spot the sample’ as in a matter of 1 minute you will hear Wun Tang Clan , Lords of the Underground and the break to B.I.G.. ‘who shot ya’. This is one of the dopest soul tunes you all really need to take a listen to this record as i cant recommend it enough.

Listen up the killer “I’m Afraid The Masquerade Is Over“

I knew David porter as a songwriter and couldn’t imagine how great were his own recordings. Enjoy them!

Conversation for album: David Porter – 1970 – Gritty Groovy And Gettin’ It