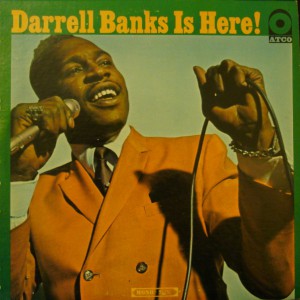 For my money, one of the most overlooked, underappreciated, “lost” classic albums in just about any genre.

Darrell Banks might have hailed from the North, but his voice and style of soul was all South. I mean, he’s got some grit behind his teeth. Not quite the preacher of Otis, maybe not as emotional as Carr, but still as powerful as either – Darrell Banks career was unfairly cut short.

He should have made it, he should be important.

At the time of writing this review, I haven’t been on a soul music kick in some time, years in fact. I listen to things here and there, but nothing deep. I’m more likely to listen to The Temptations and early Stevie than throw on Johnnie Taylor and OV Wright. Yet for the past couple years, even though my collection of soul albums is vast and underplayed, “Darrell Banks is Here!” has been one of the albums that just sounds good every time I play it. The songs are short, they’re emotional, they’re well written and there is no doubt in my mind that the live performances of such songs would have been a marvel.

This is one of my favorite soul albums, plain and simple. It’s something I try to recommend to anyone willing to listen. His voice is just too good to not know about.

You need this record in your life (by noiiiiise)

Born in Ohio in 1938, the legendary Darrell Banks possessed a voice as rugged, raw, rich and gospel-influenced as any of his Southern peers. Being able to belt as much as croon, Banks’ recordings, few as they are, rank as some of the very best soul music available. Killed by an off-duty cop in February 1970, Darrell Banks only spent 32 years on this earth. In those years, the tragic ‘Lost Soul’ crafted a talent, and through it, a small but significant body of work that will stand the test of time.

Busting out with the self-penned “Open the Door to Your Heart” in 1966, a delicious Chicago/Detroit-spiced soul beater featuring that trademark D.B.  gruffiness, Banks’ first full length album, ‘Darrell Banks Is Here!’ swiftly followed.

The beautifully soothing “Hear Come the Tears“, originally a hit by Chicago soul star Gene Chandler, captures Banks’ at his sentimental best; his vocal is awash with anguish on this lilting, neatly orchestrated ballad, especially on the heartbreaking bridge. 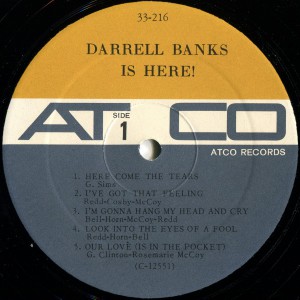 Putting on his dancing shoes, he then takes a strut through the relentlessly swangin’ “I’ve Got That Feelin‘”, a little rebel rouser tied to a catchy two-note hook that breathes supsension. That dark piano in the back adds even more zest to this Motown-with-grit finger snapper.

Banks’ lurching, haunting vocal on the very Southern-styled soul ballad “I’m Gonna Hang My Head and Cry” is every bit as gripping as James Carr’s or O.V. Wright’s best bits of wailing. Wait for the characteristic, right-in-the-groove ‘ha ha’ adlib at the end…

“Look Into the Eyes of a Fool” is more in the Motown-vein, riding a beat similar to The Drifters’ “On Broadway“, while the stompin’ floorshaker “Our Love (Is In the Pocket)” sounds decidedly more Chicago. And that same thick, mountain of funky orchestration so typical of the Windy City is audible on the incessant “Angel Baby (Don’t You Ever Leave Me)“.

Clipping guitar riffs, flurries of brass and a hard driven, rock solid rhythm lay the foundation for “Somebody, Somewhere (Needs You)“, and while somewhat reminiscent, both musically and lyrically, of “Open the Door to Your Heart“, it carries that powerful Banks vocal that never fails. It is especially incendiary on the most sizzling (proto-)funk work-out here, “Baby What’cha Got (For Me)“.

Banks’ first album ends on a more subdued note, however, as the man croons and laments on the tearjerking “You Better Go“, sounding eerily like Otis Redding in some spots.

Darrell Banks would release his masterpiece ‘Here to Stay‘ two years later, but this, his first effort, is only a few inches behind that LP’s magnificence.

Get this, get anything by D.B., and get yourself a piece of the Holy Grail of soul music.

Get his 1969 masterpiece “Here to Stay” in our back pages here.