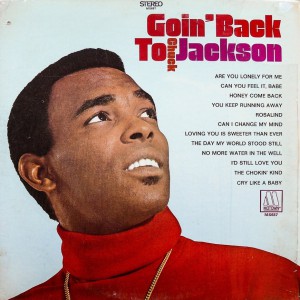 Rip & Research by Mr.Moo Posting and additional info’s by Nikos

This was the second of Chuck Jackson’s three Motown LPs, and the one that produced three very fine A-side single releases, all of which underperformed commercially. The album failed to chart despite being an exceptional marriage of Jackson’s seasoned, husky baritone and the stellar musicianship, arrangements and production values at Motown in that era — not to mention 12 songs that were all right in Jackson’s wheelhouse.

Chuck Jackson must have been a really weird fit for Motown. Top brand acquires top talent, despite the obvious apples/oranges implications. His tenure at Wand was mainly filled with well-done Iceman ballad stylings with the odd Northern track (“Chains of Love”) thrown in for giggles. But just like the Iceman himself making a pair of brilliant albums in Philly, this album works extremely well.

I would have to imagine that Chuck did something wrong in his interview with Berry Gordy. Maybe he didn’t seem too thrilled at the prospect of putting 2 white teenagers kissing on a beach on the album cover. Maybe he went on and on about how much he liked the new Isley Brothers single on T-Neck and how they’re doing so well now. In any event, Berry did not stack this album with song-writing talent. 2 Smokey songs, 1 H-D-H, 1 Ashford/Simpson, 1 Stevie Wonder, and then some other guys. No producer’s credit either. Needless to say this does not sound like a 1969 Motown album.

The album starts off well enough with a Bert Berns song but then sidesteps into a big heaping pile of Jimmy Webb.  I like bits of the first Fifth Dimension album. Other than that, I think his songs are firmly in the schmaltzy pathos category and one of the worst things to happen to soul music (other than Bobby Womack) was the endless assembly line of “Witchita Lineman” covers. (Oh, you’re a lineman for the county? Shut up already and fix the power lines then.) “Honey Come Back” is another stinker in this category and temporarily derails the momentum.

Things pick up with a solid version of “Cry Like a Baby“. Side 2 is the real stormer, however. An interesting cover of Tyrone Davis’ “Can I Change My Mind” is great, even if the trademark jangly guitar is slightly buried. “I’d Still Love You” follows and, whoa, fuzz guitar! Ominous spoken intro leads into the best production on the album. Again, I would love to know who produced this cut, as it’s definitely not Norman Whitfield territory but it’s close. “The Day My World Stood Still” is a wonderful little sleeper that opens up into a dramatically darker bridge featuring swirling strings and woodblocks with an ersatz flamenco feel and a Chuck Jackson vocal that is certainly up for the challenge. It’s the kind of staggeringly effective minor key bridge that was more common to UK psych (just replace the ersatz flamenco with ersatz Middle Eastern). A baffling little excursion that I can’t get enough of. “No More Water in the Well” is the only track that sounds even remotely like a standard Motown production, even if it is propelled by an electric harpsichord.

Motown may not have given a lot of effort and attention to Chuck Jackson, but you should. Plus he looks pretty suave in that turtleneck. He certainly looks better than I do in them.