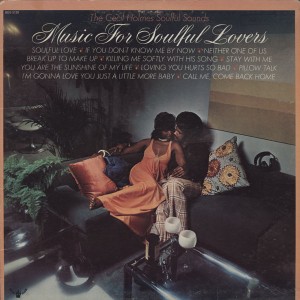 Posting and additional info’s by Nikos

I have to admit that i was unfamiliar with the talented stunt man of cover creating, Mr Cecil Holmes. When Raphy sent me the rip so we can include it to the FMS family archive it wasn’t just another average record. Rare from top to bottom, when I first put me ears on it, it seemed that I was dealing with another exceptional record that has to be discovered. A true gem that needs some tender shining. For souls sake! Unfortunately there was no info or reviews on the tremendous web, so my beloved Groovegirl (who got also excited over the LP) undertook the difficult task to research this man of Prosperous soul in heart and review it with a wonderful write up as always.

But first of all here is Raphy with his own words :

” Hi friends of FMS,
It’s been awhile since I post anything. Thank goodness we have dedicated family members to fill in the gap..
I am here pondering which album to post..You see, I’ve recorded about about 6 great lps but can’t find the time
or the strength to upload and pen a review.
On the other hand, I truly don’t want  to post an LP that is all over the blogosphere… It defeats the entire
purpose in my judgement to spread a wide amount of great, sometime unusual and rare cuts to a hungry listenership.
To all who were concerned. I am physically OK, but emotionally a wreck. I have a lot of family issues I’m dealing
with. Sorry, I just can’t concentrate to write a review. So one of our eloquent writer will pick up the slack…
I hope you enjoy my first offering for the year (is it? I’m not certain at all  lol!).. There is much more to come. 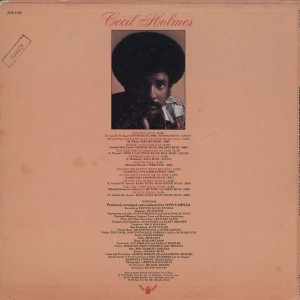 As they verbalise you can never truly judge a record by its cover. If that’s the case for starters we are twisting this concept around 360. The Cecile Holmes soulful sounds tempts us with optical clarity to become nasty smoothe funkers due to the titillating vinyl cover of Music for the soulful lovers. An astounding killer studio band that formed in time paradox with grotesque instrumental reworks of soul anthem themes, the kind that make you  run around wearing only ears and no pants. It’s not for a laugh. It’s arousing for the heart to listen to such honey dripping sounds. Let’s wisely formulate Mr.Holme’s path in the music industry to comprehend with what makes us all rashy and hypnotized on this featured vinyl lover memorabilia of the 70s.

The unparalleled maestro of covers (during the Buddah records era) started out as the Fi-Tones Quintet, a vocal R&B group in the early fifties, trying out their harmony riffs on the street corners and hallways of their inner city neighborhood ( Boy’s High School in Brooklyn,NYC). The group was first known as the Cavaliers Quartet and consisted of Leroy Ramsey, Cecil Holmes, Marlowe Murray and Ron Anderson. They caught attention of Tommy Robinson  a Harlem music entrepreneur who operated the small independent label Atlas. The Cavaliers Quintet actually recorded for Atlas and gained respectfully a  release in June of 1953(#1035-“You thrill me so”/”Dynaflow”). No sales and airplay went down the drain, forcing history to come to an abrupt ending. After personal changes, starts and stops, debate on style, the new vocal group Fi-Tones were born. (Marlowe Murray, Cecil Holmes, Ron Anderson, Gene Redd and Lloyd Davis).That was the boy story of the Fi-Tones Quintet ,five Brooklyn guys with superior way with a a ballad for two years in the mid fifties. “Foolish Dreams” on Relic included all Atlas tracks and unreleased sides just for info luck if anyone falls upon it, just grab it. 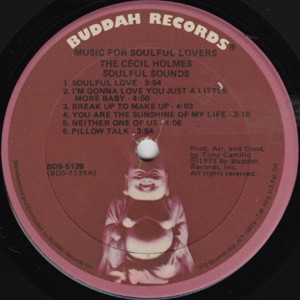 Summing up the pace of chances this fine young soul man Cecil Holmes turned into an executive at Buddah records as well as a recording artist himself. “Music for soulful lovers” as well as the first vinyl release “Black Motion Picture experience” were recorded and put in print during 73’ with a 7inch promo “Superfly” and an extra ep “Kung Fu/Soulful love” as the main course of The Cecil Holmes Soulful Sounds. The same year Cecil Holmes became a partner at Casablanca Records after the financing was secured by Warner Bros. Records and started the venutre with Larry Harris and Buck Reingold in LA. One of the first African Americans to hold the post Senior Vice President at a major label when he served as Sr. VP, the home of Village People, Donna Summer, Parliament/Funkadelic among others. Also he became one of the first African American executives to be given his own imprint label “Cecil Holmes Chocolate City” which launched the carriers of legendary Cameo. Later on he served as VP/A&R at CBS (Sony) Music working with Michael Jackson, New Kids on the Block and the late Marvin Gaye. Promoting the late West Coast Promotion rep Jheryl Busby (later Motown’s CEO) he was a man of power in history behind the scenes. In 1986 he did sign off the New Kids on the Block to their first record contract and was executive producer on their second album.

As we read on Billboard issue /12th June 1993 :“At Cameo parkway there where three of us to cover the whole country, whatever city we were in we would go to all the stations. I ended up knowing the pop guys and Neil Bogart new all the R&B guys”. “Cecile Holmes, was the guy who told me I should become a total record man says Eddie Pugh VP of R&B and progressive promotion for Colombia”. Read more for the details here.

“If you don’t know history, it is as if you were born yesterday.” Now on a fresh start we can start criticizing the ear lust again. You all know how I get sentimental on the variety of details! Legendary year 1973, album duration 42:04, sweet soul and R&B. “Music for soulful lovers” is by no chance a collaboration of heroic idol composers such as Thom Bell, Michael Burton, Tony Camillo, Linda Creed, Charles Fox, Kenny Gamble, Norman Gimble, Leon Huff, Al Jackson Jr., Willie Mitchell, Sylvia Robinson, Mary Swayer, Jim Weatherly, Barry White and Stevie Wonder. Are you dizzy enough yet? I think I just fell off my chair, just writing about it all over again. Plus an extra 26 for music personnel. Reaching peak 47 on Billboard doesn’t say anything to me in a bad way.

An album coming straight from the love god just like good old Barry White. A knock off…..and im trying to be logically sensitive with the sexual definitions of sensuality coming out of my mouth. Arranger Cecil Holmes with lush, aggressiveness and passion charms us with Music for Soulful Lovers. The 70s for me have been the over top sexuality swing for soul. Sweeping aesthetic naughtiness approaches tolerant melodic filthiness. If this was a one night ear stand I would go for it baby, mind sweating out the details on every single note played and spoken to.

With kinky hot flush sultry on Holme’s vocals this is an accomplished heartbreaker heartlover album. An ubiquitous addiction with no morals this record was made for playing in the majority of houses making babies. Its mellow mood moves just makes your heart flutter. Can sexy music be love and can love be aroused just on sound sex? Really sometimes you can’t describe musical feelings into words. I could go on forever writing about the xxx part of Holme’s side as a composer trying to reach out the heroes of instrumental breaks , floor- fillers and toning out the unmistakable bass tones of drooling infinity to the weak hearted fools of cupid. Cecil Holmes as a veteran of any number of movie themed, big band cover record stays close to the  original albeit in a big band funky format. As in “Black Motion Picture Experience” which we should dig into it soon sometime (covers of piece Also Sprach Zarathustra,Bobby Womack,Peace,Curtis Mayfield,Issac Hayes,Marvin Gaye), it has one of the few themes from the movie Slaughter committed to vinyl and worth picking up. Soulful sounds don’t linger long but they manage to get through with shoowaps and doowaps. The Funk gets back into the means of respectful imagination . I suppose if anyone hadn’t heard the originals of “Call Me ,Come Back Home”-Al Green and legendary track “Im gonna love you just a little bit more baby”-Barry White ,he would say these versions (on Music for soulful lovers) were the originals! Just think that White produced the track in 1973 as of the rest of the covers and Holmes ahead of his time grasped it and made into his own cover anthems instantly.

“Let me take you into a world of fantasy,a world of love,of space,just relax and come with me…let me love you,let me hold you close,let me ease your troubled mind,let youserlf go and come with me….Cecil is gonna take good care of you baby,its gonna be so fine” ,this is the world of Soulful Love first tracked. You are saxed and shivered down. In depth of lush strings, effective horns and mutual promises the swelling crescendo just gets into an erotic trance. Im gonna love you just a little bit more baby connects you with classic Barry in its own seduction of a concert hall into one owns bedroom love shack. “Break up to make up ” leads the “Pillow talk” to “Killing me softly with his song” a Roberta Flack old school smacking title to percolate on true undeniable adult naughtiness. Although Al Greens “Call Me” and  Stevie Wonders “You are the sunshine of my life” are a great performed adaptation to the originals you can truly say that there is no parody in aesthetics of orchestration. From a true “soulful lover” Cecile Holmes did know what he was doing when it came down to voice, soul and the love. A quite rare imprint on Budha records. So rare when I found out about the covers it was so intense and mindblowing, the friction of listening to an epic cover album lost in time! But there is a full lot of things going on behind scenes to say that nothing is left in it’s chance. A man of a great career, a great ear and a risker. The goodness always stands out. In the long run, you just got to have it.

For you and your lovers sake! Things will get oozy!

A rarity only in vinyl rip and on a vintage  1973 ampex case cassette on ebay never to have been reissued on cd. Enjoy!

Let’s all drop a line and at least say thanks to Raphy and Groovegirl for this increadible contribution. We also seek for your opinion about the album or this page! Enjoy!