Brothers By Choice were a Los Angeles-based group featuring the vocalist Chris Higgins. The self-titled album was recorded 1978 for the ALA label and released via Atlantic Records.

Rare sought after  with ‘She puts the ease back into easy‘ an excellent dancer and “Girl I need you too” a really catchy up-tempo dancer the sort of tune that the northern crowd would latch on to, among others.

Very Rare and Very out of print, don’t come up often on Ebay or anywhere else and now days never under 75$.

Highly recommended – one of my favorite albums to dance with…

This is a vinyl rip of the original ALA LP including covers. Never released on CD. 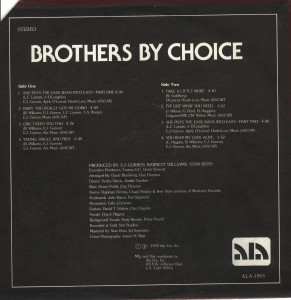 I really wanted to post this one from a log time ago – as an old favorite of mine -but there’s no much info’s on the group or the album except the following from Mickey Nold‘s blog :

The album cover is untitled but the vinyl is titled ‘She Puts The Ease In To Easy?” so not surprisingly there is confusion, it looks like they forgot to put the title on the cover! So dealers selling un-opened copies are calling it a self titled album. I’m thinking this may be the Chuck Higgins who is also from Los Angeles and recorded for Combo/Dootone in the late 50’s, if so he would have been about 54 when this album was made! If so he was a famous horn honker and track one is horn led, but no credit is given in the sleeve notes. It may even be Chuck Higgins Jr. as he did backing vocals for two of his fathers 1979 disco LP’s.

The first single from this set I think was the catchy “She Puts The Ease Back Into Easy” and has been a hard single to find. The album though is quite rare and comes along about once a year on Ebay and also has two other nice 2-Steppers as well as today’s featured song; “Baby You Really Got Me going & “She Puts The…, 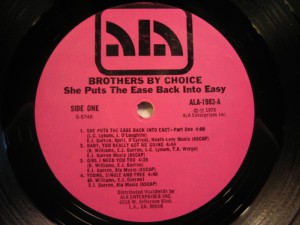 The first thing that strikes you about today’s featured song “Take A Little More” is the nice wide percussive sound provided by Gary Coleman with a nice string introduction. It’s always nice when a tune has a good beginning, middle & end, and this song ticks all three box’s. “Girl I Need You Too ” has Northern appeal with lots of horns, kinda like the old Stafford sound in fact Young Single & Free is in the same vain but sadly no lyrics. The group were previously known as The Gliders and the producer on some of the album tracks is Barnett Williams and he was a percussionist in Gil-Scott-Heron’s backing group, The Midnight Band, for a number of years from about 1974, so Dave Allen tells me! “

Listen up the killer “Girl i need you too“

Just a few more bits of info to add on to whats already been said, the group released a 7″ in 1975 on the Memphis label Fretone ‘Lonely Cities and One Way Streets’/’No Time‘ although a year earlier these same two songs were released on a 7″ on the Los Angeles label ALVA under the group name of The Gliders so it seems the group underwent a name change between the two releases, of the two songs ‘Lonely Cities‘ is nothing to special but ‘No Time‘ is an essential midtempo ballad that i just love.

The group seem to have some connection with ‘ConFunkShun‘ who we’re from Los Angeles but who spent some time in Memphis working at Stax and also released a few 7’s on the Fretone label in 1975 before getting their deal with Mercury.

If you like the song ‘How Much i Feel‘ it’s worth checking out the original version by the Soft Rock group ‘Ambrosia’ that’s on their LP ‘Life Beyond L.A.’, plus i’ve always thought that the song ‘Oh Darlin‘ was a slight variation on the ‘Delegation’ song ‘Oh Honey, although the Brothers By Choice’s vocals are far superior to either of these two groups.

I’ve just played the B-Side of ‘Oh Darlin’ a song called ‘Why Can’t You Make Up Your Mind‘ which sounds just like ConFunkShun which further endorses the connection between the two groups.

Now, while downloading this 70’s gem listen another brilliant dancer : “Baby, You Really Got Me Going“

If you want to put your hands to this wonderful album there’s 2 vinyl copies available on Groove Collector for 75€ and 100€ along with a few of their rare singles.