Brenton Wood’s charmingly unpredictable phrasing and his infectious sense of good times made the smooth uptown soul of “The Oogum Boogum Song” and “Gimme Little Sign” into hits in 1967. Despite his skill as a pop-soul vocalist, Wood was never able to match such heights again, yet those two songs became genuine R&B classics of their era.

Getting it while the getting was good, Double Shot records issued this LP the same year they dropped Oogum Boogum. “Gimme  Little Sign“, which was also included on Oogum Boogum, exploded worldwide and “Baby You Got It” had the same potential. An organ is the most dominant instrument on these half-baked but likable tracks. The songs are bubblegum-ish lyrically and musically but are not nearly as inane as the idiocy Buddah records was releasing on Ohio Express, 1910 Fruitgum Company, and others; besides, you can’t help but admire Wood’s vocal aerobics (AMG). 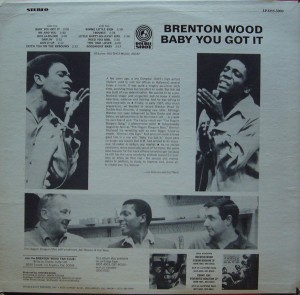 In the wake of Brenton Wood’s significant chart successes with the singles ‘The Oogum Boogum Song’ and ‘Gimme Little Sign’ it was only natural that record label management would push for a rapid follow-up.  Wood’s second release within the last twelve months, “Baby You Got It” did little to tamper with the basic formula that made his earlier release such a pleasure.  Unfortunately, even though the album continued Wood’s collaboration with producers/writers Joe Hoveen and Hal Winn, the short turn-around and pressure for more material was apparent across the album’s dozen tracks.  At least to my ears, a couple of the songs sounded like unfinished demos (‘Ooh-La-Da-De’), while other performances sounded dated as if they’d been pulled out of the tape archives (‘Me and You’).  That wasn’t to imply the album was a waste. Much of the collection underscored Wood’s artistic strengths, including a playful voice that was instantly identifiable and a sense of enthusiasm that you seldom came across.  Exemplified by material like ”Baby You Got It’, ‘Give It Up’, and ‘Little Happy-Go-Lucky Girl’ the set offered up another attractive collection of Southern California-influenced pop-soul.  Unless you’ve heard it, the hybrid’s hard to accurate describe – too pop to be consider true soul, and too soul to be considered true pop – you’ll frequently see it referred to as ‘brown eyed soul’.  Elsewhere, featuring an autoharp solo (not your everyday soul instrumentation), ‘Catch You On The Rebound’ and the surprisingly bluesy ‘Trouble’ stood as personal favorites.

– Blessed with a great pop-soul melody and an instantly infectious chorus,  ‘Baby You Got It‘ was the album’s standout performance.  As good as anything on the debut album, it was easy to see why Double shot tapped it as the collection’s debut single.  Shame it wasn’t longer.
– Apparently meant as a tribute to his 1950s musical roots, ‘Me and You‘ was a period piece ballad.  While it was interesting to hear Wood employ a crystal clear falsetto and a spoken word segment, the song was simply too old fashioned for pop-soul fans
– Featuring a double tracked vocal, one channel showcasing Wood in an uncomfortable falsetto, ‘Ooh-La-Da-De‘ could have been another classic, but instead sounded stark, somewhat clumsy and incomplete.  To my ears it’s always sounded like an early demo.   Not nearly as smooth as some of the other tracks, but still worth hearing.
– Another ‘retro’ sounding, ‘Darlin” has a more distinctive late 1950s’ soul feel.  Kicked along by some Farfisa organ and a nice bass pattern, imagine a younger Solomon Burke with a Southern California background
– Offering up one of Wood’s trademarked, breezy pop-soul performances, ‘Give It Up‘ was clearly a throwaway track.  Musically there simply wasn’t a great deal to the song, the band finding a small groove and locking into it for two minutes while Wood vamped over the top, but his upbeat performance made it a winner.
– There was no denying that ‘Catch You On The Rebound‘ was little more than a reworked version of some of his earlier efforts.  That said, the harpsichord and flamenco guitar backing gave the song enough flavor to make it enjoyable.   Would have made a strong single.

– While there was no doubt it was a great song, the decision to include ‘Gimme Little Sign‘ was kind of a mystery since it was featured on the debut album.  Guess they needed to pad the album’s running time.
– Unlike anything else on the album and one of two tracks that wasn’t written by Hoveen and Winn, ‘Trouble‘ was a dark and disturbing blues number.  Featuring Farfisa organ and acoustic guitar, the initial impact was jarring (where was happy face Brenton Wood?), but the end result was one of the album’s most impressive performances.  Double shot came back to it as a single in 1968.
– The other ‘outside’ composition, ‘Little Happy-Go-Lucky Girl ‘ provided another performance highlight.  In spite of the title, this one offered up a somber, mid-tempo ballad with Wood using his best pleading voice to try to woe a reluctant woman.  Nice !!!
– For some reason the combination of Wood’s voice and acoustic guitar has always struck me as being very attractive.  In this case ‘Need You Girl‘ was a sweet, low-keyed ballad with a great and totally unexpected spacey organ break .
– ‘Reaching back for the same creative ingredients, ‘Two Time Loser‘ was another heartfelt, acoustic guitar powered ballad.  Even better than the earlier ‘Need You Girl’.
– Closing the album, ‘Goodnight Baby‘ was another song that sounded like an unfinished demo to my ears.  The song was nice enough with the lyric about a sleep walking girlfriend putting on a robe to come see him bringing a smile to my face, but would have been even better with a bit more production support.

Conversation for album: Brenton Wood – 1967 – Baby You Got It