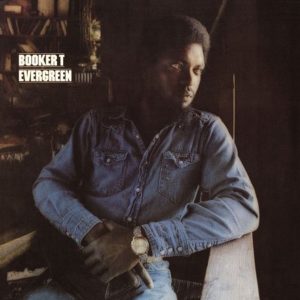 Disgruntled by the way Booker T. & The M.G.’s were treated in collapsing Stax Records, Booker T. Jones moved to
California, married Priscilla Coolidge, recorded solo (or duets with his wife) and produced other artists.
In this album, he sings some sunny folky soul and, of course, plays some killer Hammond B3 instrumentals. That duality enriches the alum, which is quite nice to listen to.

Playing organ and keyboards in the MG’s, one the greatest R&B and soul bands in the history of pop music, Booker T. Jones was no stranger to the pop world when he recorded Evergreen in 1974. As part of the MG’s, he played on innumerable Stax Records sessions backing everyone from Otis Redding to Sam & Dave, and the MG’s hit the charts a few times themselves, beginning with the timeless “Green Onions” instrumental in 1962.

But things began going south for Stax in the early ’70s, and Jones could see the writing on the wall, leaving the label well before it filed for bankruptcy in 1975 and signing with A&M Records in 1971 and consequently releasing a series of albums with his then-wife Priscilla Coolidge.

He signed with Epic Records in 1974, issued Evergreen, and then returned to A&M Records. Evergreen isn’t a soul record, at least not the way the MG’s did it, and Jones wore several hats at the sessions, playing some guitar and bass on it in addition to organ and keyboards, handled most of the vocals, and also wrote, arranged, and produced all the tracks (with the exception of a cover of Kris Kristofferson’s “Why Me“).

It’s really a laid-back roots album, and one doesn’t get any of Jones’ famous organ playing until the fourth cut, an instrumental called “Flamingo” and it’s there on the title track, “Evergreen“, as well, but most of the album is a light-breezed mix of folk melodies, subtle calypso, and reggae rhythms, ragtime, and what is know these days as soul-jazz, and it’s all very pleasing, but far from the greasy soul-funk sound of the MG’s.

Wounded Bird Records reissued Evergreen in 2013, adding in six bonus tracks, which included the single version of “Evergreen” and interesting cover versions of “Take Me to the River” and “Whiter Shade of Pale” none of which change the overall mood and feel of the original album.