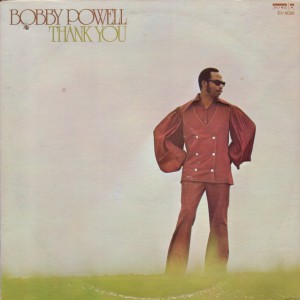 A rare gem and personal favorite.

From Baton Rouge, Louisiana, Powell was a heavily gospel-influenced soul artist, who achieved modest success in the 60s and 70s recording for small southern labels. He began his career in the church and singing in gospel groups, and in 1965 began recording for Lionel Whitfield’s Whit label in Shreveport, Louisiana. Powell secured his biggest success in 1965 with ‘C.C. Rider’ (number 1 on the R&B chart), a remake of a 20s blues standard. He obtained another hit with the funky ‘Do Something For Yourself’ (number 21 R&B) from 1966, but his most impressive recording that year was ‘I’m Gonna Leave You’ (number 34 R&B), which with its stinging blues guitar and a shouting gospel chorus ranked as one of the funkiest, most down-home soul records in history. Powell achieved some regional success in 1969 with ‘In Time’, and reached the charts again in 1971 with a remake of Baby Washington’s ‘The Bells’ (number 14 R&B).

Beginning in the late 70s, Powell began recording for the Hep’Me label, but despite some seizable regional successes failed to reach the national charts. During the 80s he functioned as a perennial opening act in Baton Rouge – regardless of who came to town, Powell performed the opening gig. By the early 90s Powell had abandoned R&B to sing exclusively gospel music. 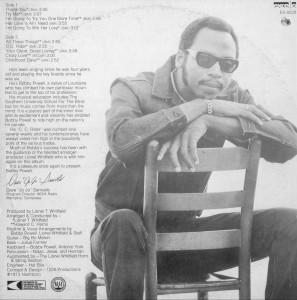 Bobby was born around 1941 in Baton Rouge, Louisiana. He began singing in church at 4, and playing piano at age 6. Bobby was educated at the Southern University School for the Blind, and was encouraged to take up music as a profession. Powell was heavily influenced by his beginnings in the church and singing in gospel groups, and it was only in his third year at college in 1964 that he began recording secular soul tunes for Lionel Whitfield’s Whit label. He recorded I Want To Know in 1964 at Deep South Studio in Baton Rouge. Leased and released on Atlantic Records, it failed to catch fire, and Powell never got another chance on a national label.

Powell secured his biggest success with his fourth 45, a cover of C.C. Rider (number 1 in 1965 on Box R&B chart, and Top 20 nationally). He obtained another hit with the funky Do Something For Yourself (No. 21 R&B) in 1966, but his most impressive recording that year was I’m Gonna Leave You (No. 34 R&B), which mixed blues guitar and a gospel chorus with great effect. Some of Bobby’s songs were leased to Jewel Records at this time. Bobby achieved some regional success in 1969 with In Time, covered Cry To Me with passion later in the same year, and reached the charts again in 1971 with a powerful gospel-style remake of Baby Washington’s The Bells (No. 14 R&B). But his recordings were not getting the attention they deserved.

Excello Records in Nashville released Bobby’s first LP, Thank You (EX8028) in 1973. It continued in the vein of southern soul, with covers of Van Morrison and Art Neville. Musical styles had changed, and this was Bobby’s last collaboration with Lionel Whitfield.

Despite some sizeable regional successes Bobby failed to reach the national charts, but did record some more classic deep soul and blues. He recorded a number of soul and slow blues numbers, favouring covers of Ray Charles and B.B. King as well as original material by Senator Jones. You will also hear Bobby Powell playing organ and singing background vocals for other artists such as Johnny Adams.

During the 80s he functioned as a perennial opening act in Baton Rouge – regardless of who came to town, Powell performed the opening gig. He returned to gospel music in the 1980s, recording the LP Down By The Riverside (Hep’Me 130).

In 2002, WestSide Records released a compilation of Powell’s 1960s singles, titled Into My Own Thing: The Jewel and Whit Recordings 1966-1971. His Hep’ Me recordings are being rereleased by Aim Records  as Louisiana Soul.

Information about Bobby Powell was found at www.oldies.com, and from liner notes written by John Ridley.

28-track collection containing nearly everything Bobby Powell recorded for Jewel and Whit during the five years indicated in the title. Though this occasionally gets somewhat generic, it’s generic in a good way – good, funky southern soul -blues, with a tight rhythm section and earthy vocals. There’s not much variety in material in Powell’s hands, even the the Beatles’ “A Hard Day’s Night” sounds like neo-Stax soul but it delivers a consistent groove and serious soul and blues fans will find this entertaining.