Barrino Brothers – 1973- Livin’ High Off The Goodness Of Your Love 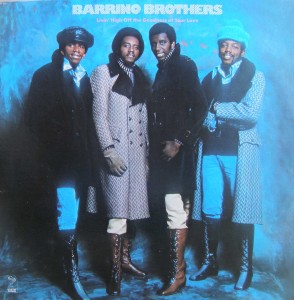 Another super rare release from the excellent Barrino Brothers whose 1972 single release ‘I Shall Not Be Moved‘ is one of the most sought after UK 45’s on the label.

The LP can easily boast many more gems too for example check out the opening song ‘Trapped In A Love’ which is another mid tempo treat that’s ideal for any commercial dance floor.For real collectors the highlight of the album must be the inclusion of the superb ballad ‘It Doesn’t Have To Be This Way’ which is a highly collectable item today.

This is a highly recommended purchase alongside the other Hot Wax/Invictus CD’s. A word of warning though, buy them now to avoid disappointment, and finding yourself waiting another thirty years until someone decides to re-issue them again.

I Shall Not Be Moved  & More 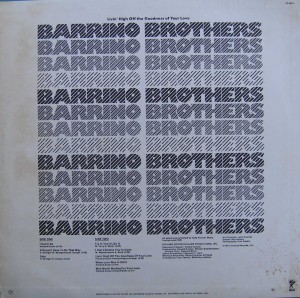 Julius, Bobby, Perry, and Nathaniel managed a couple 45s on the TCB label prior to signing to former Motown production legends Holland, Dozier, Holland‘s Invictus label in the early 70s. The production architects at Motown to both The Supremes and Four Tops first successful albums in 1964 (and their continued success while being produced by the trio), had by the latter 60s won their legal freedom from the label. By the early 70s the team was producing some of the best music to ever come out of their studios, releasing songs by Honey Cone, Chairmen Of The Board, Freda Payne, 8th Day, Smith Connection, as well as others, on several of their labels, including Hot Wax, Invictus, Music Merchant Records, etc.

By signing the Barrino Brothers it is believed it was the label’s vision to present a vocal group sound not present on the label at that time, what with Chairmen Of The Board presenting a rawer edged sound, Smith Connection- some very sweet soul, and 8th day not presenting a smoother, harmony sound. The Barrino Brother’s vocal harmony, including a deeper sound was unique to the label at the time. In 1973, on the Invictus label was released the group’s one and only album “Livin’ High Off The Goodness Of Your Love”.

Unfortunately, songs off the lp had as hard a task getting significant radio airplay as new shrubbery on the floor in the heart of the amazon! The group, as so many before them came to realize unfortunately, “it ain’t that easy“. Despite having production input from the legendary team, it was not enough to catapult the group to greater career success. The original 1973 album when appearing for sale, if in pristine condition, due to it’s obscurity and extremely low availibility, does command supply/demand numbers. The lp onto cd was released Japan only in the 80s. It has been availible to the worldwide market with 2 different titles (basically the same cd, one has a couple extra tracks, incl. instrumentals) for several years now, still as imports.

This is the release of a lost, vocal group, soul lp.

Conversation for album: Barrino Brothers – 1973- Livin’ High Off The Goodness Of Your Love